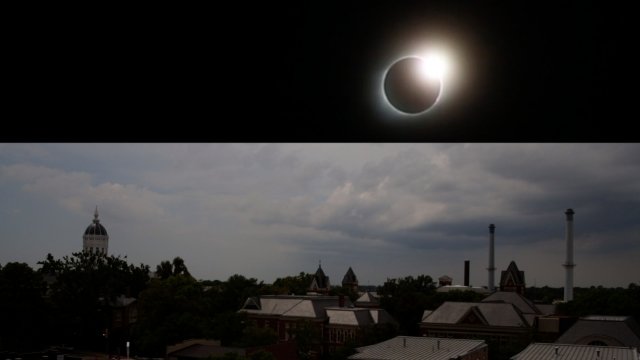 If you weren't in the path of the total solar eclipse, here's what you missed.

This is what you see and hear in the shadow of a total solar eclipse.

An eclipse begins slowly. The sky starts to darken as the moon moves in front of the sun. To watch this part, you need eclipse glasses or filters on your telescope. You can also make or find a pinhole viewer with cardboard, with a nearby tree or with your own hands. This phase lasts about 90 minutes.

Then, shadow banding happens when turbulence in the atmosphere refracts the incoming light — the same reason stars twinkle at night. A few minutes before totality, the sun is a sharp-edged crescent instead of a full disk, which makes these distortions easier to see.

Baily's beads, sometimes called "diamond rings," appear around the very edge of the moon when it's nearly eclipsed the sun. Mountains and craters on the lunar surface block sunlight in places, and let it through in others.

There's Only One Real Danger During A Total Solar Eclipse

A total solar eclipse is a natural event. For the most part, it's no more dangerous than any other day.

Totality lasts only a few minutes, but it's impossible to miss. It suddenly gets as dark as a moonlit night, and the horizon glows with twilight in every direction because you're in the middle of the moon's shadow.

In fact, if you can hear past the racket you and your fellow eclipse-watchers are probably making, you might notice the crickets come out: For just a couple minutes, it feels like night.

And then, just as suddenly, it starts getting light again. In 90 minutes, the sun is uncovered.