What You Should Know About The Pakistani Taliban 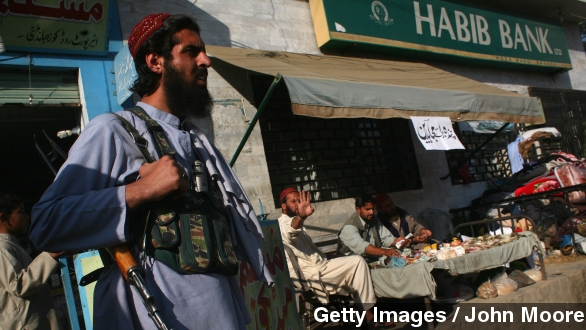 The Pakistani Taliban claimed responsibility for an assault that killed more than 80 children. What motivates attacks like this?

More than 100 people are dead, including 84 children, at a military-run school in Peshawar. The Pakistani Taliban have claimed responsibility for the mass murder. But who exactly are these militants, and what do they want? (Video via ODN)

The group goes by the name TTP, short for Tehreek-i-Taliban Pakistan. It's an umbrella organization combined of 30 or so different groups, but they all have the same goal: overthrow the Pakistani government and set up an Islamic emirate in the same way their counterparts in Afghanistan did. (Video via Pakistani Taliban, Gulf News)

It's the Afghan Taliban most of us are more familiar with, but the two groups share the same roots. (Video U.S. National Archives)

During the Soviet-Afghan war, many of the Pakistani Taliban's current commanders crossed over the border to fight. They returned home after the U.S. invaded in 2001 but kept close ties with the Afghan Taliban. (Video via U.S. National Archives)

Over the years, the group has had success in carrying out attacks in Pakistan's mostly ungoverned tribal areas but has also expanded its network to include some high-profile targets. (Video via V6 News Telegu)

They were behind the attack on teen activist and Nobel laureate Malala Yousafzai, and U.S. officials blamed them for the failed bombing in New York's Times Square in May 2010.

Pakistan also accuses the group of involvement in the assassination of Benazir Bhutto, the country's first female prime minister.

Despite the violence, just last spring, the Pakistani government had tried negotiating with the militants, even releasing Taliban prisoners as a goodwill gesture. It didn't do any good, as ultimately the talks broke down.

The government then launched a major military offensive against the militants. The Taliban said Tuesday the school attack was retaliation for killing their tribesmen. (Video via Radio Free Europe / Radio Liberty)

This video includes images from Getty Images, the U.S. Department of State and TUBS / CC BY SA 3.0 and music from Chris Zabriskie / CC BY 4.0.