When Do You Withdraw From A Presidential Race? 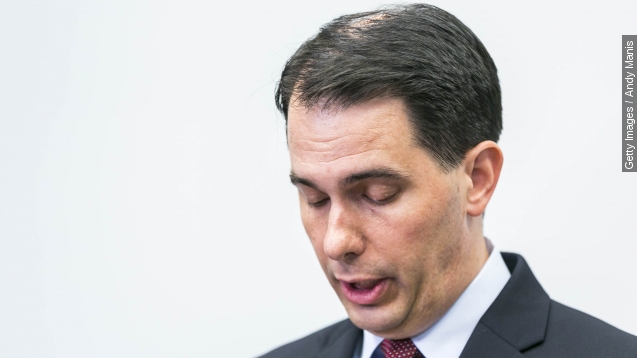 Why did Scott Walker drop out of the presidential race when other long shots, like Bobby Jindal and John Kasich, are still running?

"With this in mind, I will suspend my campaign immediately," Scott Walker said at a press conference.

It took Scott Walker 10 weeks to drop out of the 2016 presidential race.

"After some public gaffes and the rise of Donald Trump, Walker saw his money and his support dry up," an MSNBC anchor read.

Those are the two most important factors in running a campaign: money and support. Walker was losing both. (Video via BBC)

"Walker was the front-runner in Iowa just a few months ago, but, as you can see, he ended up nationally in the asterisk club," the CNN anchor read.

But why are other long shots still in the race? They likely aren't spending as much as Walker.

"He was running a expensive enterprise, his campaign was expensive, because in March he was the front-runner ... he didn't have a cheap, let's-drive-in-a-truck-and-talk-to-folks kind of campaign," commentator Nicolle Wallace told MSNBC.

And the election is more than a year out. This year's front-runner may be forgotten by then. (Video via C-SPAN)

A Milwaukee Journal Sentinel reporter asked Herman Cain, "So you agree with President Obama on Libya, or not?"

Pizza boss Herman Cain was leading the polls around this time in 2011 — until Newt Gingrich took over.

"Mike Huckabee created a television career and some own personal wealth out of that. Rick Santorum got relevancy," Chuck Todd explained on NBC.

So if you have the money or the support, why quit?

This video includes images from Getty Images and music from Birocratic / CC BY 4.0.