What History Teaches Us About Attacks On Peaceful Protesters 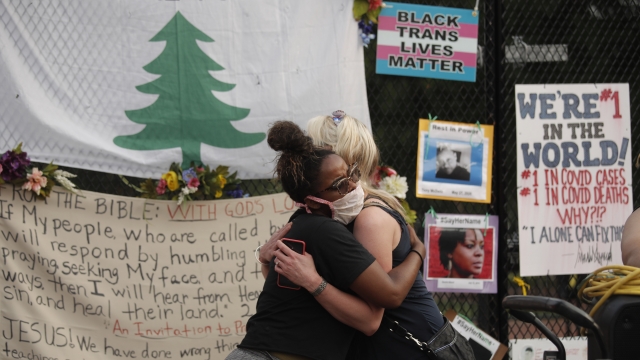 A June poll from Newsy and YouGov showed 62% of Americans supported the Black Lives Matter movement. The question: For how long?

“My husband and I have been together for 25 years and we're very involved with and for fighting for causes of those who are disenfranchised,” said activist Shawn Morgan.

After a peaceful day of protesting in his Atlanta suburb, Shawn Morgan says this happened.

“You people, you people are hypocrites," yelled an unknown man.

“He used the N-word multiple times. He's yelling at me in my face. I just, like, did that, and that's when he spit twice,” said Morgan.

“One of the biggest comebacks, I guess, for people that live in rural America, is the attitude of, don't bring that stuff to our town, we'll be ready for you,” said Lamb.

Video from violent attacks on protesters in Bethel, Ohio, went viral, along with other attacks across the country.

“Whether it was Medgar Evers in Mississippi, whether it was White protesters like Viola Liuzzo in Georgia during the march from Selma to Montgomery, the three civil rights workers who were killed and who were buried in Mississippi. Mainly it was young people marched in Birmingham who got bitten by the dogs and everything else and was on national television,” said historian Mary Frances Berry.

A June poll from Newsy and YouGov showed 62% of Americans supported the Black Lives Matter movement. The question: For how long?

“Will people stop being sympathetic just because they want their normal back?” asked Newsy's Amber Strong.

“That's the question of the hour. I saw a sign which I then put up in my window at my house, Do you want to save your property even if it means danger to Black lives? I'll put it another way: Are you so concerned about disruption and having your life go on as much as possible the way it is that you don't want to have any changes toward justice?” answered Berry.

“You're telling me that if I just vote for somebody the problem will be solved? History is that if you want change, you protest. Protest is an essential ingredient of politics. You have to be willing to protest, whether it's on social media or putting your body on the line like these protesters are doing. And no matter what the odds are, you have to be persistent,” suggested Berry.

Lamb says she and co-organizer Brian Garry's group is trying a different approach in Ohio now with community sit downs.

Morgan says he returned to protesting the very next week.