Where Does 'Fast And Furious' Go From Here? 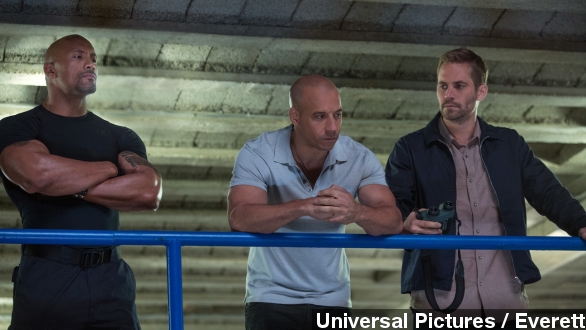 The timing and nature of actor Paul Walker's death could have serious ramifications for his best-known franchise.

The untimely and tragic death of Paul Walker puts the Fast and Furious franchise in a difficult position.

To date, the six movies in the franchise have grossed more than $2 billion worldwide. With the help of Vin Diesel, Tyrese, the Rock and others, Walker has led the franchise to break multiple records at the box office. (Via Universal Pictures / "Fast and Furious 6")

And Walker has been involved from the beginning, appearing in all but one of the Fast and Furious movies. Without him, the New York Daily News speculates Universal Pictures could have trouble pulling in viewers.

"Walker's fans could be deterred by the irony of his death. His on-screen character, Brian O'Conner, shared many similarities with the actor's real life as a fast car aficionado."

Fast and Furious 7 is set to be released July 11, 2014 but it's unclear how much of the film was finished and how big of a role Walker played in the seventh installment. (Via Empire Magazine)

Logistics aside, a Buzzfeed writer believes Walker's character is too important for any solution to really save the film.

"Walker’s death shatters that family, both on screen and off. There are no good options for the filmmakers moving forward, and any assumptions about what happens now with the film remain simply conjecture."

Fast and Furious 7 director James Wan tweeted Saturday, "I am so beyond heartbroken right now. I can't process anything." (Via Twitter / @creepypuppet)

But as the old cliche goes, the show must go on. With millions of dollars already spent and shooting for Fast and Furious 7 underway since September 2013, Fast 7 will, of course, still be released.

According to The Hollywood Reporter, Universal executives and director James Wan held a conference call Sunday morning to discuss the fate of the film.

Walker died in a car accident Saturday while riding with a friend just north of Los Angeles. Los Angeles police pronounced both Walker and the driver dead at the scene. (Via KABC)