Which Battleground States Are Ready For Increased Voting By Mail? 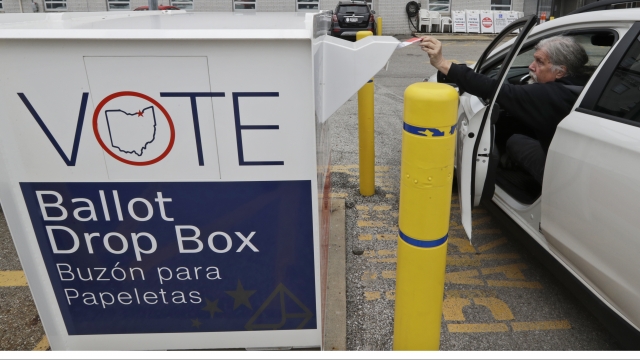 Florida and Arizona are used to processing a large number of mail-in or absentee ballots, but Texas, Minnesota, Pennsylvania and Wisconsin are not.

As the November election nears, voters are facing the reality that voting by mail might be the best option this year. And some states are better prepared than others.

Experts estimate as many as 60% to 70% of Americans might vote before Nov. 3. That would be a sizable increase over the 40% of Americans who voted by mail or voted early in the 2016 election. Joe Lenski oversees exit polling and election data that major TV networks use to call races. He says the change presents a unique challenge if mail-in ballot numbers skyrocket in battleground states.

"So it's a combination, not just of which states are going to be competitive and close, but which states have in place processes where they can report those votes quickly," said Lenski.

States like Florida and Arizona are used to processing a large number of mail-in or absentee ballots. That's not the case in some other important states like Georgia, Minnesota, North Carolina, Pennsylvania, Texas and Wisconsin, where less than 5% of ballots were submitted by mail in 2016. In Michigan and Ohio, all registered voters will receive an application to vote by mail this year. That's expected to boost the mail-in participation rate in both states, which was about 20% in 2016.

Lenski said he's most concerned about Wisconsin and Pennsylvania, where laws prevent election officials from processing or tabulating mail-in ballots before Election Day. Both states saw sizable vote-by-mail increases during their 2020 primaries.

Previous elections have shown that Democrats are more comfortable voting by mail than Republicans. So a delay in counting absentee votes can skew the early results — it's something known as the "blue shift."

"It's possible to imagine a blue shift occurring in the presidential election and be determinative of the outcome in a battleground state. So Pennsylvania, Arizona again, you know, we could be in for a bumpy ride," said Edward Foley, the director of the election law program at at The Ohio State University's Moritz School of Law.

That "blue shift" might contribute to President Donald Trump's frequent criticism of voting by mail. But that rhetoric could do Republicans more harm than good.

"If this surge continues, if it worsens in the fall of COVID, Republicans are going to have to rely on a lot of those mail-in voters. ... I've heard from a lot of Republicans that are really worried about this rhetoric from the President that it could really harm Republicans. So not just him, but down ballot as well," said Jessica Cook, the Senate and governors editor for the Cook Political Report.

Widespread voter fraud is not a problem in the United States. When there are isolated cases, it's usually an effort to influence a small-scale race, like for city or county government.

"For a statewide race, it is — I don't want to say completely impossible — but it's extraordinarily difficult to pull off a successful fraudulent scheme that would completely go undetected," said Foley.

Dealing with mail-in ballots just takes extra time. Someone has to complete little tasks, like opening the envelope and unfolding the ballot, as well as bigger tasks like verifying a voter's identity. And a number of states have laws that prevent election officials from getting a head start before Election Day.

"It's an unintended byproduct of changes that we've made in the aftermath of Bush vs. Gore and the 2000 debacle to try to improve the voting process. And one way we've tried to improve it is more voter choice," said Foley.