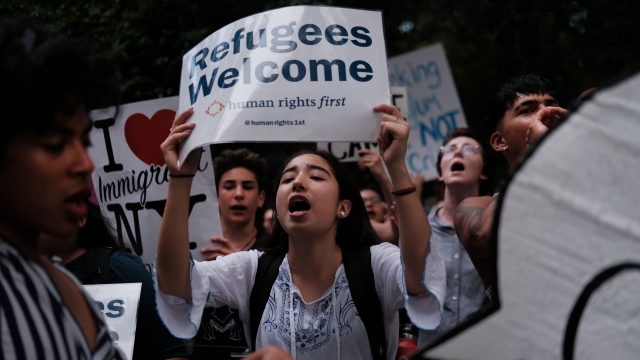 The New York Times reports that the administration is looking at two main options. One reduces the cap by at least half. The other allows no refugees.

The Trump administration is considering cutting back on the number of refugees admitted in the U.S.

Before we move on, let's clarify the term "refugee." It's not the same thing as "migrant." A migrant seeks to resettle in a new country in order to have a better life. A refugee is forced to flee their home because of conflict or persecution.  There's a backlog of hundreds of thousands of migrants at the border, but that doesn't count toward the refugee cap. Most refugees that resettled in the U.S. last year were from Democratic Republic of the Congo, Myanmar or Ukraine.

Currently, there's a limit of 30,000 refugees admitted into the U.S. per year. We don't quite hit that cap, but an official told The Associated Press that allowing that many people in every year "limit[s] how many refugees can be vetted."

Officials spoke to several new outlets anonymously. The New York Times laid out two main options on the table: In one option, the number of refugees allowed into the country would be cut by at least half and the spots would be reserved mostly for people from countries or groups with special status.

In a second option, no refugees would be let in. The president would have the power to let some people into the country in emergency situations.

White House officials are expected to discuss the issue further on Tuesday.