White House Has New Slogan On Infrastructure, But Message Is The Same 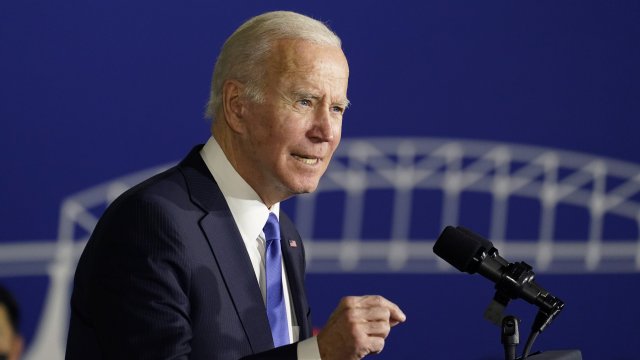 President Joe Biden unveiled a new slogan for his $1 trillion infrastructure package on Wednesday, but his overall message is staying largely the same.

President Biden, trying to rebound from sagging poll numbers, rebranded his Bipartisan Infrastructure Framework as "Building a Better America." He spoke at the Kansas City Area Transportation Authority, surrounded by buses and signs featuring the new slogan as he continued a weekslong tour to put greater focus on the planned spending for roads, bridges, water systems, broadband and greater resilience against climate change.

The economy has revived since President Biden took office, but high inflation, political polarization and the inability to fully break free of the coronavirus pandemic have all hurt his popularity. The new slogan for his big, just-passed infrastructure package says the president's bipartisan deal will improve the country in ways well beyond repairing its aging roads and bridges.

The new slogan hews closely to President Biden's separate "Build Back Better" agenda of tax hikes on the wealthy and an expansion of education, family and environmental programs still pending in the Senate. That slogan, too, has its critics, who say it makes it challenging for people to easily grasp all that's in the package.

President Biden mixed together talk of "Build Back Better" with the new infrastructure law on Wednesday, declaring that the risks of climate change mean roads need to be constructed higher and that costs more money.

"You got to build back better," he said in his remarks.

The White House launched a website Wednesday that asks Americans to record videos about how the infrastructure spending will help their own communities, part of a search for grassroots support as the administration seeks greater recognition for its achievements ahead of the 2022 midterm elections.

The infrastructure law will fund upgrades and repairs to roads, bridges, mass transit and water systems nationwide, along with a shift to electrical vehicles to help ease the effects of climate change.

"It's time to stop just kind of repairing our grandparents' infrastructure — it's time to start innovating," said Rep. Sharice Davids, a Democrat from the nearby state of Kansas who spoke at the event.

President Biden lost Kansas and Missouri in last year's presidential election. But the tour is a chance to make inroads with voters by showing that the administration can deliver results. Missouri has nearly 2,200 bridges and more than 7,570 miles of highway deemed in poor condition. Under the law, the state could expect $7 billion for highways and bridges, a nearly 30% increase in federal funding, the White House said.

The Buck O'Neil Bridge in Kansas City is among the bridges in the state in need of repair.

It's named for Buck O'Neil, a two-time All-Star first baseman in baseball's Negro Leagues and the first Black coach in the Major Leagues. O'Neil, who died in Kansas City in 2006, was inducted in baseball's Hall of Fame on Sunday.

Construction on a replacement bridge began in the fall, before President Biden signed the infrastructure bill, and is expected to be completed in the fall of 2024, at an estimated cost of close to $220 million borne by the state and the city.

The 65-year-old bridge is a key route connecting downtown Kansas City with northern Kansas City and growing suburbs across the Missouri River, and carries about 50,000 vehicles a day, according to the state Department of Transportation. It opened in 1956 and has required frequent upgrades and repairs in recent years.

President Biden kicked off the infrastructure tour nearly a month ago with a speech at the Port of Baltimore.