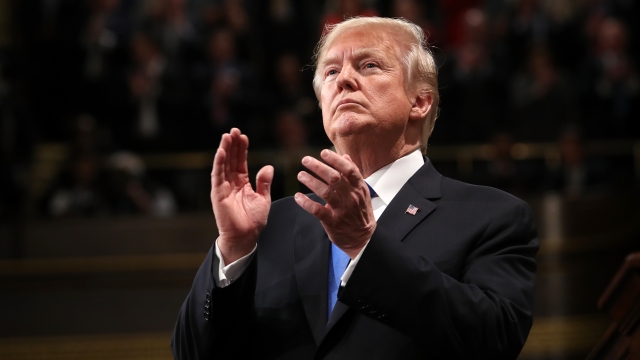 President Donald Trump likes to take credit for the improving economy, but can the results be attributed to his presidency?

With President Donald Trump officially hitting the halfway point of his presidency, the White House put out a compilation of the "historic results" he's achieved in his first two years.

That list highlights a wide range of statistics, new laws, deregulation efforts and more. But we're going to focus on just a couple of those points centered around jobs and the economy — something the president talks about a lot.

"Well, if you remember, the previous administration said there won't be any more manufacturing jobs; you're going to need a magic wand and all of that. Well, we had the magic wand," Trump said.

One statistic focuses on manufacturing jobs. The White House says President Trump is "delivering on his promise" to bring those jobs back and that the industry added 284,000 jobs in 2018. President Trump reiterated that in a recent tweet, writing, "Last year was the best year for American Manufacturing job growth since 1997." Data from the Bureau of Labor Statistics shows those numbers do check out.

But it's harder to pinpoint what impact the president had on those increases. Manufacturing jobs have been increasing pretty steadily since 2010 under the Obama administration. The Trump administration has pointed to its new tariffs as a reason for the boost, but economists and business owners are split on whether those help or hurt the manufacturing industry.

Another improvement the White House pointed to was the number of Americans on food stamps. The administration noted that, thanks to the president's policies, 4.6 million people have come off the assistance program since the 2016 election. That number is also accurate.

But President Trump's administration hasn't necessarily caused that decline. As the economy improves, food stamp enrollment usually goes down. In fact, the annual average enrollment has been consistently dropping since 2013, before President Trump took office. The Trump administration has proposed changes to the food stamp program, but they haven't been finalized yet.

So by both those measures, the economy has been improving during President Trump's administration, and the White House numbers we checked out were true. But, as you know, economics are extremely complicated, and no president is single-handedly responsible for these changes.