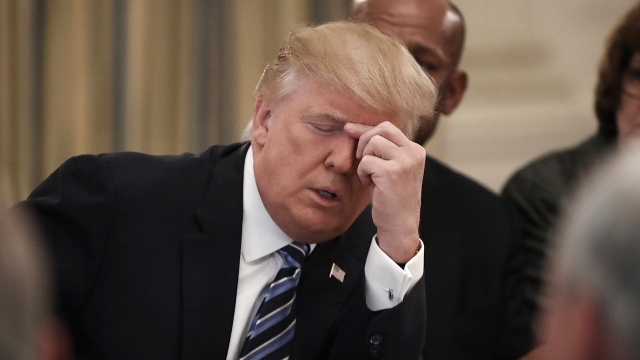 "We tailored that second executive order to comply with the judge's order. I think to go back now and say, 'Well, based on how the first order was conceived' makes absolutely no sense," press secretary Sean Spicer said.

Spicer said the U.S. Justice Department will fight the court rulings to try to reinstate the travel ban.

Before submitting the new order, White House officials revised the old one in an effort to make it more agreeable to the courts. But the biggest roadblock for the ban may not be what the order itself actually says, but what Trump said while campaigning.

Israel Has A Travel Ban, Too

Israel's Parliament passed a law that denies entry to anyone who has called for others to boycott Israel or its territories.

"Donald J. Trump is calling for a total and complete shutdown of Muslims entering the United States," Trump said at a campaign event.

A Honolulu federal judge said Trump's call for a Muslim ban proved the executive order was "issued with a purpose to disfavor a particular religion."

And Trump doesn't seem to be changing his tune to try to get the latest executive order approved. At a Nashville, Tennessee, rally Wednesday, he described the second version of the order as a "watered-down version of the first one."

The ban would have blocked citizens from six Muslim-majority countries from entering the U.S. for 90 days and kept out any refugees for 120 days.