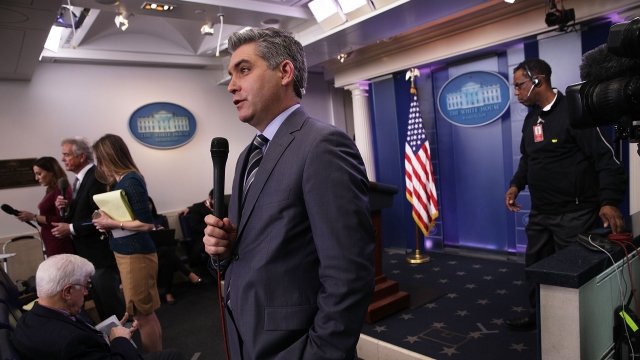 The White House claims it revoked Jim Acosta's credentials because he placed his hands on a White House intern. CNN says that's a lie.

The move came hours after a contentious news conference where Acosta questioned President Donald Trump's description of a migrant caravan heading toward the U.S.-Mexico border as an "invasion."

"They're hundreds and hundreds of miles away. That's not an invasion," Acosta told the president.

"Honestly, I think you should let me run the country. You run CNN," President Trump responded.

Things escalated further when Acosta tried to ask the president about the Russia investigation and refused to hand over the microphone to a White House intern.

"CNN should be ashamed of itself having you working for them. You are a rude, terrible person. You shouldn't be working for CNN," President Trump later told Acosta once he handed back the microphone.

In a statement Wednesday night, press secretary Sarah Sanders referred to Acosta's exchange with the intern as "unacceptable," saying, the White House will "never tolerate a reporter placing his hands on a young woman just trying to do her job."

But CNN says Sanders is lying and that the real reason Acosta's press pass was taken away is because he asked "challenging questions" at the event.

The White House Correspondents' Association is publicly urging the White House to reverse its decision, which it called "weak and misguided."