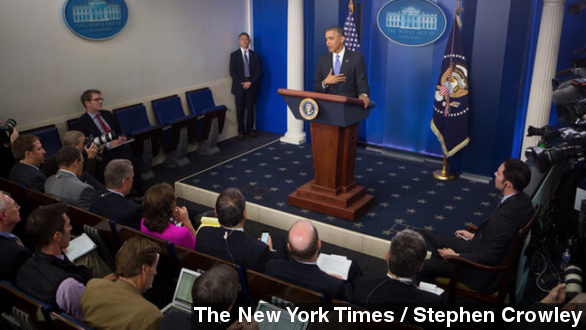 A private consulting firm warned the Obama administration six months before Healthcare.gov's launch the website would have major problems.

Despite assurances from President Obama he didn’t know about problems with Healthcare.gov until after its launch.

“On the website, I was not informed directly that the website would not be working as — the way it was supposed to.” (Via The White House)

A new report suggests at least some within the administration were given early warning signs six months ago — and some are questioning whether that ever reached the West Wing. (Via The White House)

Back in March, the White House brought in a private consulting firm to assess the development of the website. (Via CBS)

This was the report it prepared for the Department of Health and Human Services. The major risks included, “Marketplaces unavailable with system failure, long manual processing times, and failure to resolve post-launch issues rapidly.” (Via Centers for Medicare & Medicaid Services / The Washington Post)

But two weeks after HHS Director Kathleen Sebelius is said to have attended a briefing on that report, she told a Congressional committee the site’s progress was “on track and on time.”

SEBELIUS: “At this point, our energy and resources are focused on getting it up and running, and we are on track and the contracts have been led and we are monitoring it every step along the way.” (Via U.S. House Energy & Commerce Committee)

Some Republicans are now casting doubt on the sincerity of her testimony.

FRED UPTON: "We now know that the secretary's testimony did not match what was happening behind the scenes." (Via Fox News)

In a response to The Washington Post, a spokesperson for the White House said: “flags were definitely raised throughout the development of the Web site, as would be the case for any IT project this complex. . . . But nobody anticipated the size and scope of the problems …”

The White House, while admitting the website’s launch has been less than ideal, has downplayed the backlash as a partisan attempt to drive Americans away from the site. But the frustration is growing on both sides.