White Women Voters Are A Wild Card — And Wildly Important 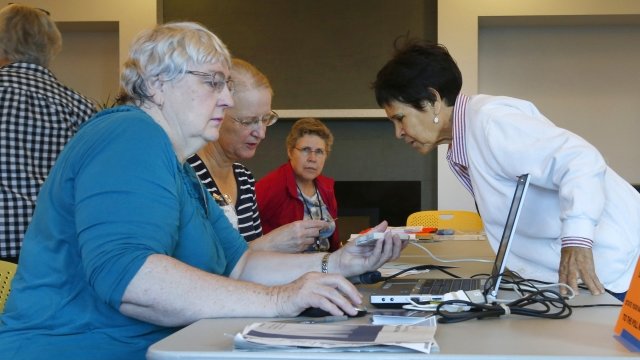 White women could go either way in the next national elections. And they could determine the outcomes.

When it comes to elections, unknowns are myriad — especially in midterm elections.

National issues can sometimes cut across districts and state lines — like, say, a drawn-out war. Then sometimes local issues — maybe a factory closing or a splashy scandal — can influence who wins a House or Senate seat.

A singularly powerful unknown that could determine the entire outcome is what white women will do on Election Day. They're the perennial wild card and numerically wildly important.

A study published by Rutgers shows in 2016, white women showed up in huge numbers, trouncing all other ethnic groups, even trouncing white men by more than 4 million votes.

In a 5-4 decision, the court ruled Ohio is complying with requirements laid out in the National Voter Registration Act.

It was much the same in the 2014 midterm. Fifty-six percent pulled the lever for the House candidate next to the letter "R."

Now, imagine if they funneled all that voting power to join left-leaning coalitions. It's not necessarily a hypothetical anymore. Signs of GOP slippage are showing.

In 2017, 40 percent of white women with college educations approved of Trump in a Washington Post-ABC News poll. A year later, that fell to 34 percent. This is important because 4 in 10 — 44 percent — of college-educated white women voted for Trump in 2016. A significant shift in support to Democrats could make a big difference in the midterms — and to Trump 2020.

Another Post-ABC News poll shows white women favoring Democrats over Republicans in the midterms by 12 points after favoring Trump by 9 points in 2016.

But it gets kinds of complicated.

Studies show that white women often vote the way their husbands vote, in part because many are financially dependent on their husbands and feel that voting with them is in their best economic interest — and a lot of men voted for Trump in 2016 because they thought he was better for the economy.

On the other hand, there's the #MeToo movement. That could make sexual harassment and equality more of a pressure point going forward. Will the president's dicey history with wives — and TV show contestants, alleged mistresses — become a factor?

So we come back to the question: What will white women do? Will they signal negative feelings about Trump through House and Senate votes? Or will they set that aside and stick with local Republicans, many of whom they know and like?

A lot of ifs here. White women will be at the polls. Who will they be supporting — or denouncing?