Who Are The Top Terrorists Still At Large? 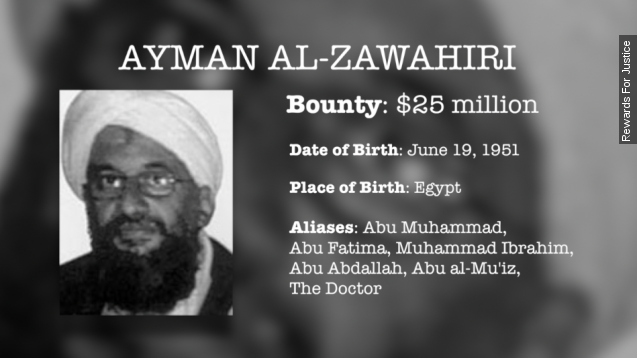 The U.S. war on terror has taken out several key terrorist figures in recent years, but several prominent names remain at large.

But several key terror figures are still at large. Here are some of the world’s most wanted terrorists.

Ayman al-Zawahiri is the current commander of Al-Qaeda.

He was Osama bin Laden’s right-hand man and the group's operational leader. Some think he had a bigger role planning the 9/11 attacks than his boss.

Today, his group is fighting ISIS for supremacy, which he cut ties with in 2014.

As for Zawahiri, it’s believed he’s hiding out somewhere in Pakistan’s tribal areas.

As the head of ISIS, Abu Bakr al-Baghdadi considers himself the leader of the world's Muslims and his so-called caliphate. Little is known about Baghdadi. In fact, Baghdadi isn’t even his real name.

Earlier this year, there were rumors he had been killed in an airstrike. (Video via U.S. Central Command)

But in May, the reclusive leader released an audio recording, calling on Muslims to pledge allegiance to ISIS.

Abubakr Shekau is the leader of Boko Haram. For the past six years, his group has terrorized Nigeria with a wave of bombings  and mass kidnappings. (Video via ENCA)

Shekau’s exact whereabouts are unknown. The Nigerian military has claimed to have killed him before, but he always resurfaces in propaganda videos like this one.

Ibrahim al-Asiri is Al-Qaeda’s master bomb-maker and a prominent figure in its Yemen-based affiliate, Al-Qaeda in the Arabian Peninsula or AQAP.

The Saudi chemist was likely behind the underwear bomb a Nigerian terrorist smuggled onto a U.S. airliner in 2009.

His ability to craft sophisticated, nearly undetectable explosives is one of the reasons counterterrorism officials consider AQAP to be Al-Qaeda’s most dangerous branch, and a threat to the U.S. It’s believed his apprentices are trained to continue his work if he’s killed.

And that’ll always be the concern. Killing terrorists might be a morale boost for the war on terror, but it’s not always an effective strategy. These groups tend to recover —  replacing the leader and moving on.

This video includes images from the U.S. Department of State and Getty Images, and music from Podington Bear / CC By NC 3.0.