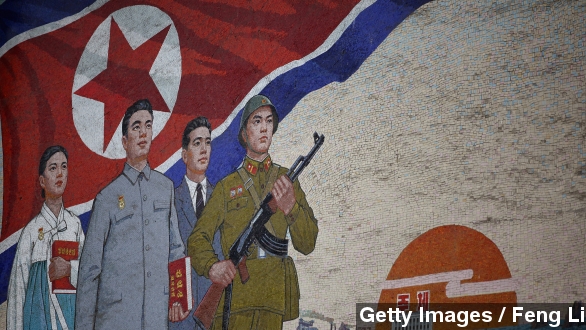 North Korea's internet is (mostly) back up again after a country-wide outage of unknown origin took place earlier on Monday.

North Korea’s Internet is reportedly becoming usable again after nine and a half hours of either being down or under some sort of cyberattack.

Internet performance monitoring group Dyn Research posted a tweet late Monday showing North Korea's Internet back online after a nine and a half hour blackout. About seven hours later though, the group posted another one, stating the country's Internet was still intermittent.

While there's no word from The White House on whether or not it was involved in the attack in response for the Sony hack, a spokesperson for the U.S. State Department danced around confirming or denying any involvement. (Video via Sony Pictures Entertainment / 'The Interview')

"We aren't going to discuss publicly operational details about the possible response options or comment on those kinds of reports in any way except to say that as we implement our responses some will be seen and some will not be seen," said U.S. Dept. of State spokeswoman Marie Harf.

But not everyone thinks it was the U.S. Matthew Prince of CloudFlare, an Internet performance and security company, told CNN, “If it’s an attack, it’s highly unlikely it’s the United States. More likely it’s a 15-year-old in a Guy Fawkes mask.”

North Korea’s Internet outage coincided with a push from hacker collective Anonymous, code-named "Operation RIP North Korea." A Twitter account affiliated with the group appears to have claimed responsibility for the outage.

As a tech writer for The Washington Post points out, as soon as the Anonymous operation was said to be underway Thursday, a security research firm found an uptick in denial-of-service attacks against North Korea.

But the outage and its continued disruption won’t affect too many inside the Hermit Kingdom. According to NBC News, a majority of the nation’s 24 million residents have zero access to the Internet and those who do have access are generally government or military officials. (Video via ODN)

"They only have four official networks connecting the country to the Internet. ... It's very likely that the United States or maybe some patriotic hackers took a look at those networks and said 'There are only four of them. We might like to take those out,'" said Jordan Robertson of Bloomberg News.

And over the weekend a U.S. official told The New York Times that the U.S. was looking to China for help in blocking North Korea's Internet. In a news briefing Tuesday, China denied any involvement in North Korea's recent outage.