Who Has Boycotted The Sochi Games So Far? 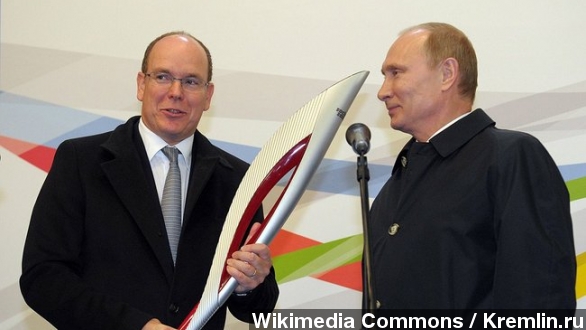 As French officials announce their boycott of the Sochi Olympic Games, celebrities and sports figures have kept up their protests.

What started as protests over the Sochi Olympic Games have turned to boycotts.

​​The French foreign minister announced French officials, including President Francoise Hollande, will not attend the games. ​Several days before that, the German President Joachim Gauck announced his own boycott. (Via WRC-TV)

The Olympics have turned the world’s eye on Russia’s human rights policies, including a strict anti-gay propaganda law.

Although Putin has assured the world that gay athletes will be welcome in his country, activists and celebrities have been calling for a boycott for months. (Via Wikimedia Commons / Presidential Press and Information Office)

And it’s not just heads of state who are protesting. EU Commissioner Viviane Reding announced her boycott on Twitter last week.

Lady Gaga, Madonna and Elton John all spoke out while performing in Russia, and British actor Stephen Fry wrote an open letter comparing Sochi to the 1936 Berlin games hosted by Nazi Germany. (Via YouTube / AlekseySH1982, StephenFry.com)

The Huffington Post writer Bob Burnett called the 1936 games "a missed opportunity for Americans to protest human rights abuses," when America decided against a boycott.

Speculation for who will boycott next has turned to everyone from the United States to the athletes themselves.

The Washington Post's Jenifer Rubin urged a US boycott, writing, "There is no reason to indulge the Russians. ... It would be a small but telling gesture if the Obama administration and all members of Congress would steer clear of Sochi."

And a lot is on the line for Russia. Not only is there a $51 billion price tag — double the London summer games budget— but Putin has “staked his personal prestige … to highlight his country,” according to BBC. (Via The Telegraph)

​New Zealand speed skater Blake Skjellerup might be the only openly gay athlete at the games. He says he will compete not only because of his athletic career but also to stand up for what he says he is proud of. (Via CNN)