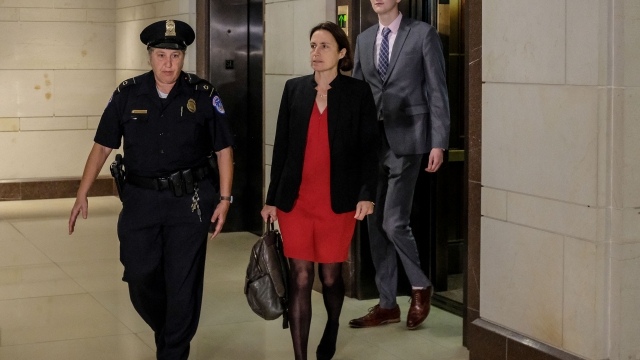 Last month, Hill testified Rudy Giuliani had pushed for investigation into a debunked conspiracy theory that Ukraine meddled in the 2016 election.

Fiona Hill was President Trump's top Russia policy adviser until she resigned just days before his July 25 phone call with Ukrainian President Volodymyr Zelenskyy. That call is now the focus of an impeachment investigation.

Hill will testify in a public hearing on Thursday on whether President Trump leveraged military aid and a White House visit to coerce an investigation into former Vice President Joe Biden and his son, Hunter.

Based on Hill’s expertise on the rise and fall of the Soviet Union and the emergence of Vladimir Putin, she has warned in the past that the Russian president is being overlooked as a threat to Ukraine.

"We're talking today about deterring Russia, but Putin and his security team are also trying to deter us, the United States and NATO from interfering in any way militarily against Russia in any of the conflicts in Ukraine or in Syria."

And in Hill's private deposition last month, she said President Trump's private lawyer, Rudy Giuliani, pushed for investigation into a debunked conspiracy theory that Ukraine had meddled in the 2016 presidential election. Hill called it a "meta-alternative narrative" and said there is no doubt as to the actual culprit: Russia.

She also said that in a July 10 meeting with Ukrainian officials, Gordon Sondland, the U.S. ambassador to the EU, "blurted out" a promise of a presidential visit if Ukraine investigated Hunter Biden's involvement with the country’s energy sector.

Hill said then-national security adviser John Bolton told her to alert a National Security Council lawyer. Bolton reportedly said, "I am not part of whatever drug deal Sondland and [acting White House Chief of Staff Mick] Mulvaney are cooking up on this."

Hill also described Sondland as knowing so little about Ukraine that he was "driving along with no guardrails and no GPS." Yet Sondland told her he was taking charge of U.S. interests there. Hill testified: "I asked, "On whose authority?' And he said, 'The president'."