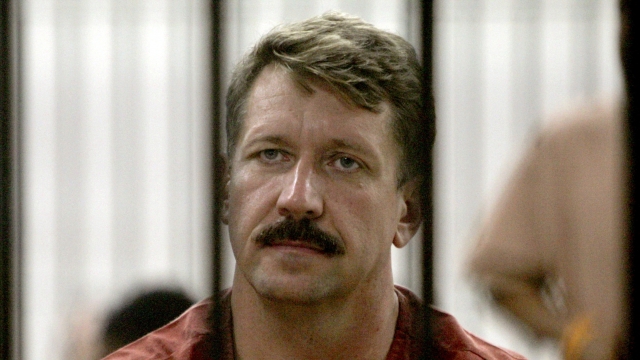 Known as the "Merchant of Death," Viktor Bout is now back home in Russia as part of an international swap that has given basketball star Brittney Griner new life.

Bout is a Russian arms smuggler who gained his nickname for running cargo planes loaded with weapons to war areas in Africa and beyond in the 1990s.

Sometimes, he would sell arms to both sides in the same conflict.

The U.S. has said his huge weapons deals helped fuel wars around the world.

Ultimately, he was captured in a ruse by the U.S. Drug Enforcement Agency that lured him to Thailand.

He was convicted in 2011 on terrorism-related charges, including conspiring to kill Americans.

"The gravity of what Griner is accused of is nowhere near the gravity of the crimes by Viktor Bout, who put Americans and other innocent civilians in danger by his illegal trade of weapons. And so, it was uneven in that sense. But the U.S. ultimately decided they had to do the deal in order to bring Brittney Griner back," said former State Department Official David Tafuri.

Bout had been in U.S. custody for more than a decade; more recently in a federal prison in Illinois.

It's not clear why Russia wanted him back, but analysts say Russian President Vladimir Putin may have simply wanted a diplomatic victory over the U.S.

"Who knows why Putin decided to do it now? Nobody can really get into Putin's head. He makes decisions. And the only thing that guides his decisions is his own self-interest. So, for some reason, he wants Victor Bout back. Now he's connected to Russian intelligence agencies. Maybe he sees some value in having him back, and maybe that's also a message of strength to know to his audience at home," said Tafuri.

On Thursday, Russian state media released footage seemingly showing the prisoner exchange, followed by boot boarding a plane, getting his temperature and pulse checked and telling his mother on the phone that he’s fine.

Newsy was unable to confirm the veracity of the state-provided footage.