Unveiling Vladimir Putin: The Man, The Money, The Mystery 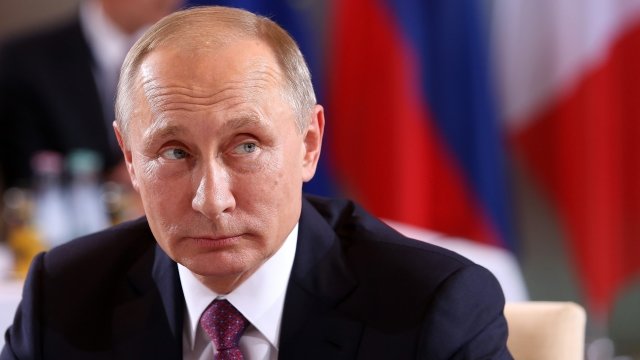 Vladimir Putin looks like a character straight out of James Bond. Maybe the villain.

If that's not what comes to mind it could be this: a shirtless encounter with nature, shirtless fishing, or a little sunbathing — all in Siberia, mind you.

But who's the man behind the visage? The Putin dossier is thick. Born: 1952 in Leningrad. Religion: Orthodox Christian.

He was married to a flight attendant from 1983 to 2014, when they divorced. As for dating, now it's been rumored the president is dating an Olympic rhythmic gymnast, and the BBC even speculated they wore wedding rings.

Putin Isn't Too Happy With The US Treasury List

The rest of his life is pretty hush-hush. For instance, Putin's wealth. Financial filings ahead of the March 18 election showed that he earned  $673,000 between 2011 and 2016, according to The Washington Post. Unofficially, one estimate puts Putin's net worth at $200 billion, held by associates and front companies.

That's the personal. Putin's professional life can be summed up in one word: aggressive.

Before politics, Putin was a KGB spy in Russia and East Germany. Writers Fiona Hill and Cliff Gaddy speculate in "Mr. Putin" that his mission in East Germany included stealing technological secrets and compromising visiting Westerners. He served from 1975 to 1990, and he left as a lieutenant colonel.

That's when he entered politics. What happened next is meteoric. He went from city hall committee chairman to prime minister to president — three times already.

Putin's public demeanor is often steely, projecting a cold, calculating, careful ex-spy. But as The Atlantic notes, he's actually a risk-taker. He goes for it. The 2014 annexation of Crimea was risky, but it paid off. His approval rating shot up.

Coming to the aid of Syria's Bashar al-Assad in 2015 and sticking his menacing fingers in the 2016 U.S. presidential election? Both seen as wins, internally.

The guy isn't afraid to make a power play, but the question is: Will Putin really be finished in 2024 at the end of a fourth term?