Who's Going To Lead NASA Under Trump's New Order? 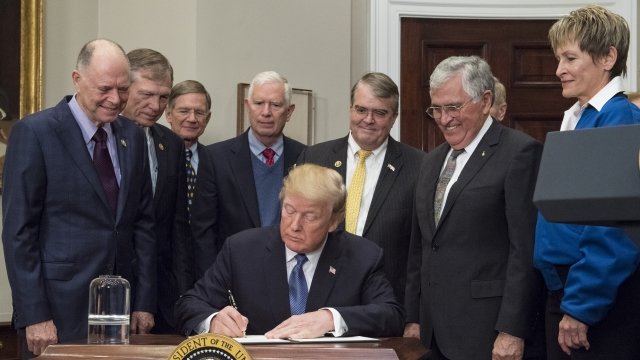 Several leadership roles are still vacant or have been temporarily filled since Trump took office.

President Donald Trump recently signed a directive calling for NASA's administrator to get astronauts back to the moon and eventually to Mars. There's just one problem: NASA still doesn't have a permanent administrator.

The agency's leadership has been in limbo since Trump took office. Robert Lightfoot has been NASA's acting administrator since January 2017, and several other roles are vacant or temporarily filled.

Trump nominated Rep. Jim Bridenstine to head NASA, but the Senate still has to confirm him. And Bridenstine might not even get the job — politicians representing Florida's Space Coast have already objected.

A new declaration from the Trump administration will order NASA to send American astronauts back to the moon with the goal of getting to Mars.

If Bridenstine isn't confirmed, Lightfoot is likely to stay in the role until Trump makes another nomination — whenever that would happen.

And the Trump administration seems comfortable directing NASA on its own. The Space Policy Directive 1 came from a recommendation by the recently revived National Space Council with Vice President Mike Pence at the helm.