Who Will Win The Second-Screen War? 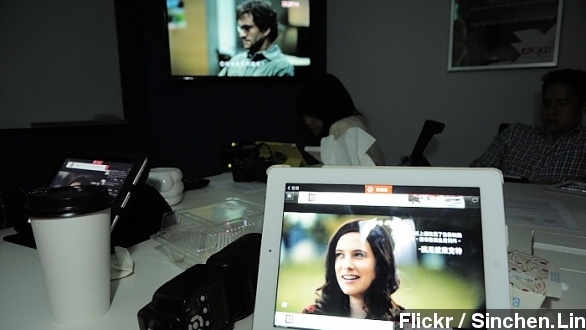 Twitter CEO Dick Costolo is ready to invest in his company's second-screen efforts.

Who's winning the war over the second screen? It's hard to tell when so many are fighting for it.

Everyone's pushing a second-screen experience, including Disney's "The Little Mermaid" and AMC's "The Walking Dead."

We've been combining movie and TV viewing with tablet, phone and computer use for a while now. Early in 2013, Mashable Editor-in-Chief Lance Ulanoff told HLN with brands waking up to the trend, change would come in a big way. And no one would want to leave money on the table.

"Fifty percent of the people who are doing this on social media are going on these services to look at, find people who are watching shows at the same time and interact with them, and everybody understands this."

Apps such as GetGlue from AdaptiveBlue were poised to take advantage of all those eyeballs splitting time between the two screens.

Then mobile TV guide app i.TV bought GetGlue Wednesday. The deal's terms weren't disclosed, but Variety reports it was an "all-stock deal worth far less than the $24 million GetGlue had raised from investors including Time Warner Inc." and others.

And Thursday, when talk of Twitter's IPO dominated tech news, the company's CEO Dick Costolo put his mouth presumably where the money is in an interview with Bloomberg.

But is the second screen a savior for the first screen? In a blog post for The Huffington Post, Jim Monroe from Net2TV says he's having second thoughts. Monroe also used to work for TiVo and makes no bones about picking up a tablet when he's bored with a TV show.

"But to do what? … Launch a second-screen app with more information about the show I've just abandoned? That doesn't sound right, does it?"

Then there are apps like Touchcast trying to win the second-screen war in reverse by prompting people to bring Web content to their TV screens and interact with it.

Meanwhile, plenty of familiar names such as Shazam and Facebook continue to compete in the space. And we'll continue to keep an eye on who emerges in this second-screen skirmish.