Why A Russian Object Is Being Called A 'Satellite Killer' 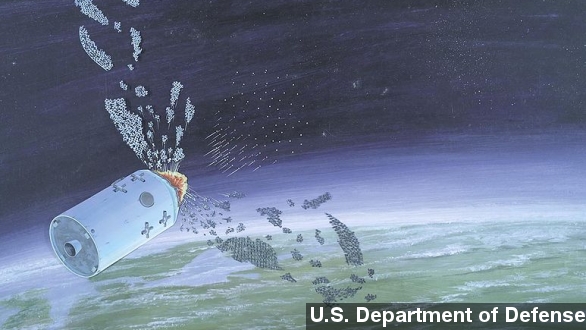 An unidentified Russian spacecraft is getting some attention, with some saying it could be for research while others say it could be a weapon.

Outer space is having a moment. In recent weeks, we've celebrated at least one great success — with the Rosetta mission — and two setbacks, one of which resulted in the death of a Virgin Galactic pilot.

Now, there's a space mystery brewing, with some outlets using terms like "satellite killer" to describe a Russian spacecraft currently orbiting our planet.

Russia reportedly launched a rocket back in May containing a few military satellites. Afterward, an object that was thought to be debris started making maneuvers, even seemingly making contact with other Russian spacecraft.

Fueling speculation is the fact Russia didn't initially declare the object's launch until much later. That of course doesn't mean there's a sinister objective for the satellite. Patricia Lewis, space security expert for think-tank the Chatham House, told The Washington Post, "I have no idea what it is."

But speaking to the Financial Times, Lewis did give some guesses to what it could be, saying, "It could have a number of functions, some civilian and some military. One possibility is for some kind of grabber bar. Another would be kinetic pellets which shoot out at another satellite."

Those highly-imaginative possibilities sound a bit unsettling but aren't exactly shots in the dark.

This is a U.S. Department of Defense sketch from 1986 of what an anti-satellite weapon would've looked like — shooting pellets.

As it turns out, Russia actually had an anti-satellite program called Satellite Fighter program. The Soviet Union launched its first "killer" satellite in the '60s, but the program eventually fell apart after the Cold War.

Again, nobody really knows what this new satellite is, but if it really is a satellite killer, it isn't the only one of its kind.

Robert Christy, a long-time satellite tracker, told The Moscow Times via phone the U.S. and China are developing similar technology. He said, "In a nutshell, you've got all three countries doing the same thing."

In fact, just last year, Chinese satellites also had "experts guessing" after one intercepted another.

If you're interested in tracking the Russian satellite that has revived this anti-satellite weapon conversation, log on top n2yo.com and search for Cosmos 2499.