Why Are The Majority of White Evangelicals Against Welcoming Refugees? 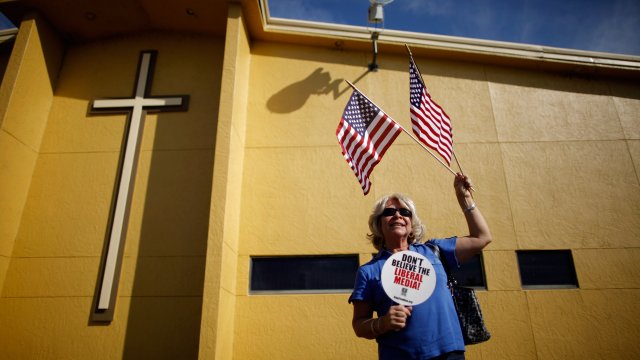 Evangelical leaders have long welcomed refugees in the U.S., saying that's what the Bible preaches. Why are they now a minority among their peers?

The recent editorial in Christianity Today calling for President Donald Trump's removal has rekindled the debate about why white Evangelicals are so devoted to the president. But one question about white evangelicals continues to be ignored: Why are so many of them opposed to welcoming refugees?

A 2018 Pew Research survey found that white evangelicals are the religious group least likely to support refugee arrivals in the U.S. Confirming the trend, another poll by the Public Religion Research Institute shows white evangelicals are also the most likely to favor a ban on new refugees in the country. Those findings also happen to reflect the President's views on immigration.

"It really started with the recent presidential election and even going a little bit for that with the rise of ISIS and, and the fear of Syrian refugees. People began questioning our allegiance and our loyalty to this country because we spent so much time and put up too much of a heart into welcoming people from other countries. And they began questioning if we were, you know, supporting terrorism."

Gordon College professor of political science Ruth Melkonian-Hoover just published a book about Evangelicals and immigration. She says that white Evangelicals are increasingly taking their cues on refugee issues from conservative politicians. But she also stresses that Democrats are partly to blame for that trend.

"The parties are pulling and informing folks on questions of refugees more so than what they are hearing in their congregations or what they are finding themselves from their own study of the Scripture. Part of why they are looking more conservative is Democrats have become more liberal on refugees than they were historically as well."

Newsy reached out to every current or former member of President Trump's informal evangelical advisory board for an opportunity to comment. Pastor Rodney Howard-Browne, known for fringe conspiracy theories, is the only one who took up our offer ahead of our deadline.

"I don't see refugees as America's problem. Refugees are a world problem."

The South African-born pastor of a Florida megachurch argues that progressive Christians are using the Bible to enhance their own political agenda. He also says that Christians need to "take care of our own people," echoing arguments from the Trump administration, which has drastically reduced refugee arrivals in the U.S.

"People take the Scripture and hit you over the head 'you're obligated,' you're not obligated to do anything. You have to do what's right. But what's right is taking care of your house first. If these Christians are worried about refugees, then travel the world and help locals take care of the problems where they are."

Many evangelical groups have long been vocal advocates of the refugee resettlement program. One of those groups, World Relief, has been helping refugees resettle in the U.S. for decades by partnering with volunteers in churches around the country.

"If you are a Christian who takes the Bible seriously, the Bible is not ambiguous on how to treat a vulnerable stranger who comes into your land."

Despite what religious teachings say about welcoming refugees, some evangelicals believe the issue has become too politicized.

"We have become so political in how we think about this issue that we no longer think about it from a Christian perspective. We allow the political parties and the various news channels to make our decisions for us, instead of allowing the Bible to speak primarily, and then working out of that."