Why Are So Many Mexican Immigrants Going Back Home? 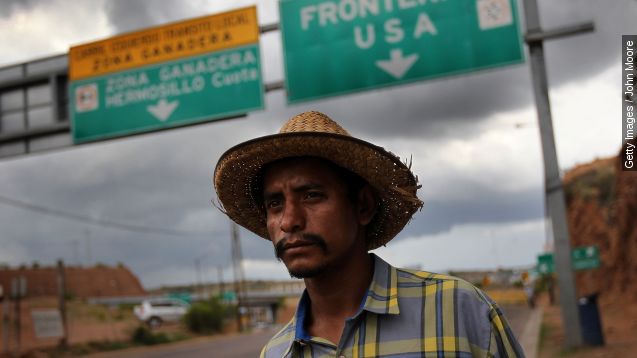 A new study from Pew Research Center shows more Mexicans are leaving the U.S. than are coming in. So what's causing the trend reversal?

"I will build a great, great wall on our southern border, and I'll have Mexico pay for that wall," Donald Trump said as he announced his candidacy for president. (Video via Donald Trump)

Presidential candidates warning voters about the influx of undocumented immigrants from Mexico should have a look at a recent survey: Turns out more Mexicans are leaving the U.S. than entering it.

According to a report from the Pew Research Center, both legal and illegal immigration from Mexico to the U.S. may have peaked for good. Data collected from the two governments shows that from 2009 to 2014, 870,000 Mexicans immigrated to the U.S. while 1 million returned home.

So why are they leaving? Lots of them say they're homesick. According to Mexico's National Survey of Demographic Dynamics, 61 percent of returning citizens say they left the U.S. to be reunited with family.

Job availability is likely another driving factor in the trend reversal. The U.S. economy has been struggling to right itself since the recession. But on the flip side, the director of Hispanic research at the Pew Research Center says Mexico's improving economy encourages people to stay put.

Take a look at the numbers. Back in 1970, fewer than 1 million Mexican immigrants lived in the U.S. In 2000 that number stood at 9.4 million. Seven years later, 12.8 million Mexicans were living in the U.S. Then we suffered a financial crisis and jobs evaporated. Since then, the numbers have been declining.

But there are still plenty of other immigrants coming to the land of the free to pursue the "American Dream." The U.S. Census Bureau reports China overtook Mexico in 2013 as the leading country for new immigrants. A close second: immigrants from India.