Why Aren’t There More Electric Vehicles On The Road? 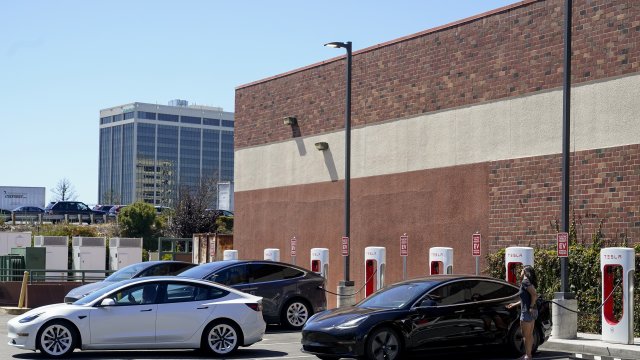 Electric vehicles are on the rise, as many consumers are considering an electric car over gasoline cars to save money.

Opening up the butterfly doors of his Tesla Model X never gets old for Ron Zarbock.

The lifelong Utahn decided to buy an electric vehicle five years ago because he wanted to help the environment.

"It's very inexpensive to operate, there's no maintenance costs except for tires," Zarbock said.

And more people are following his lead.

In July, Consumer Reports found a majority of Americans would buy or are considering getting an electric car — are still skeptical.

In a similar survey from market research firm JD Power, nearly a third hesitated because they just didn't know enough about EVs.

"I do like the savings as far as gas mileage, but I do have to find out more about them," said Pam Taylor, who's shopping for a new car.

Price is another speed bump.

More than half of shoppers told Consumer Reports they were put off by the costs of owning an EV.

It's true that electric cars are generally more expensive than gasoline cars.

Data from Kelley Blue Book this year puts the average electric car at around $63,000.

And what about fuel-ups

How To Charge A Country Full Of Electric Vehicles

Is U.S. infrastructure ready to handle the demands of more electric vehicle charging?

The price to charge your EV can run about a third of the cost to fill up on gas each month.

Plus, 30 states charge hybrid and EV owners a fee to make up for the money they're not paying in gas taxes, which help cover infrastructure costs.

Jack Marchbanks is the director at the Ohio Department of Transportation.

"Up until this point if you were driving an EV or a hybrid to the extent that you are not using gasoline you were not helping support the system on which you depend," Marchbanks said.

And you won't have to spend money on gas or changing your oil and filters.

Last year the Department of Energy found EVs have lower scheduled maintenance costs than gas cars; a difference of $0.04 per mile.

That may sound small, but one analysis found that could save you over $8,000 during your EV's lifetime.

Plus, there are government rebates for owning an EV, although they are limited.

"You have a tax credit based on which type of vehicle you buy. Some have run out, for instance the Teslas have run out because they were oversubscribed, but all the new models have the opportunity to generate a personal tax incentive," said Kevin Kushman, CEO of Electrada.

Even if more people were able to afford the cars, one-third of those surveyed by JD Power said they wouldn't have any place to charge at home or at work.

The Department of Energy says there are nearly 43,000 charging stations nationwide, with around 120,000 individual ports.

But they're not spaced out evenly, leading to a phenomenon dubbed range anxiety.

Scott Fink is the owner of Volkswagen Wesley Chapel.

"We don't get range anxiety with gas because there's a gas station every mile," Fink said.

Government data shows in some states there are as few as three charging stations for every 100,000 people.

And California has nearly the same amount of charging stations as the 39 states with the lowest count combined.

Arizona is getting over $76 million in federal dollars to boost charger accessibility, but leaders say it's not as easy installing more of them.

Alexa Scholl is the Tucson Metro Chamber of Commerce Director of Government Affairs.

"One of the concerns is the cost. Also, the availability of the materials to install the infrastructure, with all the labor and supply chain shortages we are experiencing right now," Scholl said.

Americans may also be holding off on EVs because of their love of big cars.

According to data from Edmunds, a car shopping website, 80% of the top 10 selling vehicles in the U.S. are either trucks or SUVs.

But, a recent survey from Recurrent, the world's leading analyst of EV battery health, found pre-sales for some electric trucks and SUVs are passing lifetime sales for older EV models.

EV salesmen acknowledge range was limited in the past.

But they say there are more makes and models that can fit drivers' needs.

Hooman Shahidi is the president of Evpassport.com.

States are now in the driver's seat to find solutions to consumers' biggest concerns.

Like in Indiana, where the Department of Transportation is developing the world's first wireless charging highway, with magnetic fields embedded in the road.

Or the Electric Highway Initiative, which aims to build the largest corridor of charging stations in the nation between eight western states.

"When you travel from Salt Lake City, Moab, Boulder or Zion, that you know when you get there, you'll be able to charge that vehicle keep playing and then make it home," said Salt Lake City Mayor Erin Mendenhall.

Hesitation could wane as the government ramps up production efforts.

President Joe Biden also issued an executive order last year, calling for half of all new cars to be electric or plug-in hybrids by 2030.

And popular car brands are plugged in to the need.

Like General Motors, which declared that it will only produce electric powered cars by 2035.