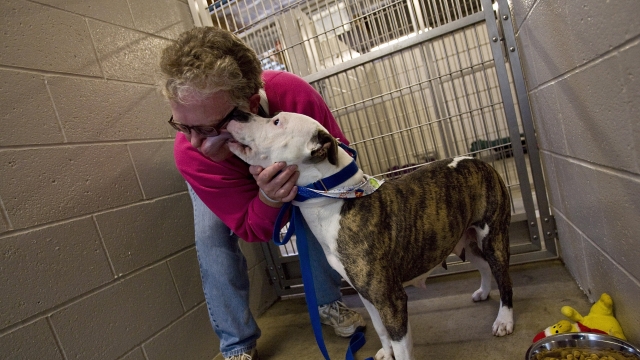 A study found that potential adopters are more likely to want a pit bull when the dog isn't labeled as its breed.

On National Puppy Day, who doesn't love some young, furry cuteness? But for some pups, no matter how cute they are, their breed could stand between them and a forever home.

A study published Wednesday found that dogs labeled as pit bulls were less likely to be adopted than other dogs with similar looks.

Researchers found when breed labels weren't used, potential adopters liked pit bulls more than their lookalikes. But when breeds were included, lookalike dogs, such as boxers, were seen as more attractive.

So what's behind this anti-pit bull mentality? It could be the public perception of the breed. Pit bulls are often viewed as aggressive dogs, but a dog's behavior is more a consequence of its environment and its owner, not its breed.

Another struggle for pit bulls — breed specific legislation. Some cities and counties across the country ban residents from owning pit bulls or other breeds deemed as aggressive. And many landlords ban their tenants from owning aggressive dog breeds, such as pit bulls, German shepherds and Doberman pinschers.

Because of that there are thousands of pit bulls up for adoption across the country. On Wednesday, online adoption website Petfinder listed over 20,000 pitties looking for a new home. The second-most listed breed was Labrador retriever at about 14,300 and then just under 10,800 Chihuahuas.

So maybe if we started calling pit bulls by their proper breed name, or by no breed name at all, lovable, adoptable dogs would be a little less intimidating.

The video includes images from Getty Images and an image from S. J. Pyrotechnic / CC BY SA 2.0.