Why Calls For Peace During Baltimore Riots Have Rung Hollow 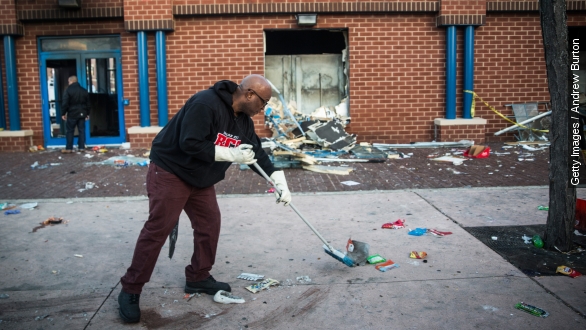 The riots in Baltimore have drawn plenty of criticism, but a few outlets are offering explanations for the unrest.

In response to the riots that have hit Baltimore in the wake of Freddie Gray's death earlier this month, there have been many calls for peace.

"Too many people have spent generations building up this city for it to be destroyed by thugs," Rawlings-Blake told a press conference.

And thousands of protesters who've demonstrated since Gray's death have been peaceful. (Video via Voice of America)

But there's been a pushback against some condemnation of the riots — and instead, an effort to offer explanation.

Some argue the riots are a response to what many in local communities see as repressive policing. (Video via WJZ-TV)

The Baltimore Sun ran an extensive report back in September 2014 on lawsuits against the Baltimore PD for alleged brutality.

Salahudeen Abdul-Aziz told the Sun, "One officer get up, put his knee right here onto my chest, and put his hand straight on my throat like to the point like I could not breathe in or out."

A writer for The Atlantic argues, because the local government hasn't done enough to stop alleged abuses like that from happening, the calls for peace ring hollow:

"When nonviolence is preached as an attempt to evade the repercussions of political brutality, it betrays itself. When nonviolence begins halfway through the war with the aggressor calling time out, it exposes itself as a ruse."

Some outlets have even pointed to the words of Martin Luther King Jr. — arguably the most famous advocate of non-violent demonstration in the U.S. — for further explanation of the riots. (Video via U.S. National Archives)

In a 1968 speech in Michigan, King said, "A riot is the language of the unheard. And what is it America has failed to hear? ... it has failed to hear that large segments of white society are more concerned about tranquility and the status quo than about justice and humanity."

Now, a writer for The Washington Post argues, "All of the pent up anger and bitterness has boiled over into the kind of rioting Baltimore has not seen since the 1968 uprising that followed the assassination of Dr. Martin Luther King Jr."

This video includes images from Getty Images and the U.S. National Archives.