Why Can’t Congress Agree On Immigration? 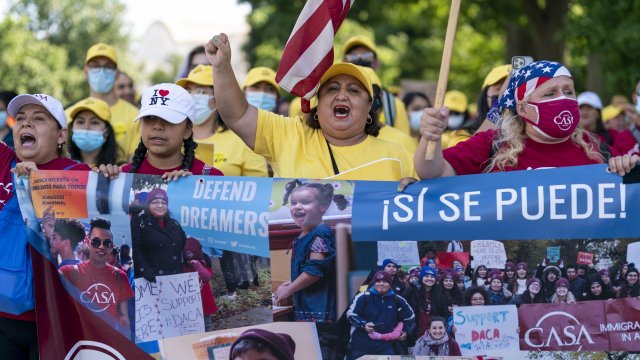 Here, we have more immigrants than any other country in the world, with more than 40 million people born in another country living in the U.S.

Immigration is one of the fundamental building blocks that make the U.S. the nation it is today.

Here, we have more immigrants than any other country in the world, with more than 40 million people born in another country living in the U.S.

But the debate over immigration policy has been contentious.

“We have to do it in a way that secures our border, has a path to citizenship, respects the value family to us that has certain principles that we would agree to," said House Speaker Nancy Pelosi.

“Senate Democrats have taken every meaningful opportunity to back the administration’s border policies and vote down Republicans’ efforts to improve security," said Senate Minority Leader Mitch McConnell. "Their votes have helped create this mess.”

Xiao Wang with the immigration company Boundless tells us any type of compromise is tough to come by in the hyper-political landscape of today.

“You need 60 votes in the Senate to pass any law that affects green cards, or the way citizenship is handled, and the only topic you can get 60 senate votes on, is daylight saving time," Wang said.

History proves reaching agreement in Washington over immigration has not come often.

The first immigration law that passed was the Naturalization Act of 1790.

That limited U.S. citizenship to any 'free White person.’  it excluded almost anyone who wasn’t from Europe, like Native Americans and enslaved Africans.

And exclusivity for white immigrants became even more apparent with the 1882 ‘Chinese Exclusion Act' which targeted Chinese immigrants’ legal entry to the U.S.

It wasn’t until 1965 that the U.S. saw major immigration reform with its ‘Immigration and Nationality Act’ – signed into law by president Lyndon Johnson — which set the main principles for immigration rules still enforced today.

Under that law, priority was given to skilled laborers, and immigrants who had spouses, parents, siblings, or other family members already in the U.S.

It’s what former president Trump has referred to as ‘chain migration.’

As a result, the U.S. started to see less European immigrants and more migrants from Africa, Asia, and Latin America entered.

In the three decades following the 1965 law, more than 18 million legal immigrants settled in the U.S.

Throughout the 1980s, illegal immigration was booming as many migrants entered the U.S. through the Canadian and Mexican borders.

That’s where the long lines of immigrants started to form.

And that put immigration at the forefront of politics.

The Immigration Reform Act in 1986, signed by President Ronald Reagan, attempted to address the issue by allowing millions of unauthorized immigrants to apply for legal status, and penalized employers who knowingly hired undocumented immigrants.

According to the Migration Policy Institute, the law granted legal status to 2.7 million people.

In the early '90s competition for jobs between low-income Americans and migrants picked up, as the country faced a recession.

Congress then passed the Illegal Immigration Reform and Immigrant Responsibility Act’ in 1996, signed into law by President Bill Clinton, which aimed to enforce the country’s borders and the use of social programs by immigrants.

Instead, the numbers kept rising.

Pew Research Center estimates the unauthorized immigrant population living in the U.S. rose from the '90s into the 21st century, before hitting a peak of 12 million in 2007.

Despite a few modifications, the immigration policies from the '50s and '60s are the same ones governing our system today.

For immigrants, there are two basic paths to citizenship in the U.S.: through birth or naturalization. But naturalization can be an extremely long and complex process.

Pew Research Center data shows more than 77 percent of immigrants in the U.S. are lawfully living here. Others try to get in illegally.

And more migrants are arriving daily.

Immigration has become a partisan wedge issue within congress and the country, raising other legal, humanitarian, economic, and political issues.

And it continues to be a focal point among politicians running for office.

Despite congressional deadlock on immigration, recent administrations have found loopholes through executive action.

Back in 2012, to address the approximately 800,000 children born elsewhere but brought to the U.S. as children, President Barack Obama allowed these so-called dreamers to apply for the Deferred Action for Childhood Arrivals program, also known as DACA.

But for DACA recipients, the problem is the program currently offers no pathway to citizenship.

According to CBP, the Trump administration completed 450 miles of barrier, though not all was built from scratch.

The 45th president also implemented a travel ban on several majority-Muslim countries — a move he said would protect Americans from terrorist attacks.

And he moved to end the DACA program.

Many of those campaign promises have either been blocked in court or abandoned altogether. As a result, two signature Trump administration asylum policies remain partly in place.

One is the ‘Remain in Mexico’ program for people seeking asylum in the U.S.

Anotehr is Title 42, a pandemic health order that allows border agents to swiftly expel migrants without screening their asylum claims.

It’s been used to expel more than 1.7 million migrants since March of 2020.

The Biden administration’s push to lift the health protocol has so far failed — with a federal judge siding with two dozen Republican state attorneys general in a lawsuit to block the end of Title 42.

While Washington continues to debate the issue of immigration reform, millions are kept waiting.

And patience is wearing thin as border cities like El Paso, Texas declare a state of emergency to help alleviate with the thousands of migrants trickling in.

And they will likely continue waiting, as immigration experts don’t think an agreement on major immigration reform will come any time soon.