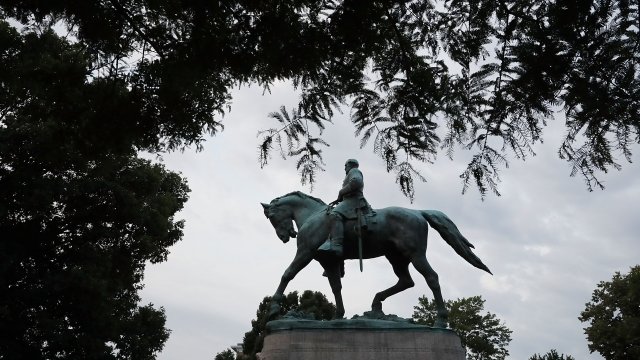 The heritage and history of these monuments are tied to the so-called Lost Cause of the Confederacy, which has been described as "Confederate nostalgia" and also the oppression of black Americans after the Civil War.

The Baltimore City Council voted unanimously this week to remove the statues after the events in Charlottesville, Virginia.

According to a 2016 report from the Southern Poverty Law Center, at least 1,500 symbols dedicated to the Confederacy exist in public spaces in the U.S. They include statues, flags and holidays and are mostly in Southern states. Around 700 of those symbols are monuments.

Groups like the United Daughters of the Confederacy, which in the late 1800s consisted of mostly white women, built monuments to preserve the memory of Confederate soldiers and where they fought even though Robert E. Lee, an instrumental Confederate figure, opposed that idea.

Homegrown Terror Is More Common Than Islamic Terror In The US

Months before the violence in Charlottesville, Virginia, the Trump administration began shifting focus away from right-wing homegrown terror.

Notably, the majority of these statues were put up in cities across the South during the re-emergence of the KKK — a group the Daughters supported — during the implementation of Jim Crow laws and during the civil rights era. In some cases, they were put up to intimidate black Americans.

"After the Civil War, these statues were a part of that terrorism as much as a burning cross on someone's lawn; they were erected purposefully to send a strong message to all who walked in their shadows about who was still in charge in this city," New Orleans Mayor Mitch Landrieu said May 19 during a speech about removing Confederate monuments.

Along with the mayor of New Orleans and the governor of North Carolina, local government officials in Baltimore; Lexington, Kentucky; and Charlottesville, Virginia; and others have either removed or plan to remove Confederate monuments.