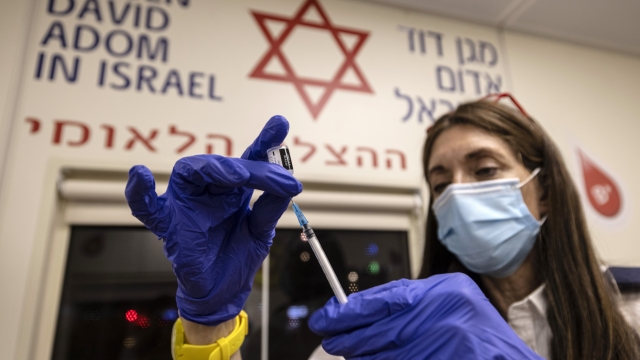 The FDA still needs to approve booster shots after looking at the clinical trial data.

A lot has changed since the first Americans got their vaccines. In a word: Delta. The CDC says the variant now accounts for nearly 100 percent of new COVID-19 cases in the U.S. And while vaccines are still incredibly effective at preventing hospitalization and death, the CDC says boosters are a good idea.

With vaccines, boosters, and variants -- science is happening in real time. It comes down to efficacy – how the vaccines work under controlled-study circumstances – compared to effectiveness – how they work in the real world.

Dr. Greg Poland, the director of the Mayo Vaccine Research Group said, "We have already seen some decrease in the ability of these vaccines to protect against symptomatic disease with Gamma, Delta and Beta variants."

The best case study may be Israel. It has among the world's highest levels of vaccination for COVID, mostly the Pfizer vaccine. And those vaccinations started earlier than in the U.S.

But over time, the effectiveness of the Pfizer vaccine dropped from 95 percent effective in preventing infection in January to April to just 39 percent in late June to early July.

"It appears to be durable in the sense of protecting people against the most severe outcomes of infection like hospitalization, death, severe disease," Poland said. "But simultaneous with time moving on has been the development of more and more viral mutations and viral variants. And that may be the more important issue."

New research from the Mayo Clinic backs that up. It shows the Delta variant's spread dropped Moderna's effectiveness to 76 percent and Pfizer's to 42 percent.

"When you look at the studies on Johnson and Johnson over that eight month period for some of their endpoints, the effectiveness actually increased over time," occupational physician at the Mayo Clinic Dr. Melanie Swift said. "So we may well have a different recommendation for boosters based upon whether you got an mRNA vaccine initially or you got the Johnson and Johnson vaccine initially."