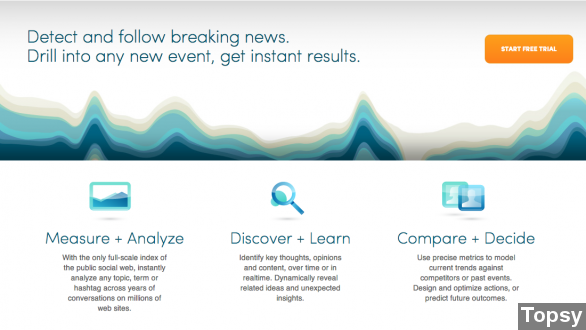 Apple’s latest acquisition, Topsy, is a little different than its typical buys. Topsy is an analytics firm that specializes in Twitter. Apple scooped up the company for around $200 million.

Topsy is unique in that it’s partnered with Twitter, giving it access to the full, worldwide database of tweets. With more than 450 million tweets going out each day, that’s quite a bit of social media insight.

According to the Wall Street Journal, because of Topsy’s full access to Twitter’s databases, it’s likely the Cupertino company had to ask Twitter for permission to purchase the firm.

The Journal says Twitter declined to comment, Topsy didn’t respond, and Apple gave its typical canned phrase about buying small companies and not discussing its plans. So why would Apple be after such a specialized analytics company?

Cult of Mac takes a whack at speculation, suggesting Apple could use the company’s analysis of the social web to improve its advertising platform, or iAds, or to improve search in the App Store.

I​f Apple knew what apps people were discussing on Twitter, it could surface those apps in search or use social media insight when determining popular apps.

Or the company could go the Twitter Music route and analyze tweets for popular songs, rolling that into its existing iTunes Radio product.

So which one will it be? iAds, improved search, Twitter, music recommendations? When you think about it, analyzing millions of tweets could be rolled into a number of Apple’s services. Topsy will likely help Apple determine what people are talking about — what’s important to them.

And then there’s always Forbes’ guess: “ ... Apple could want it for its team, not the technology.”