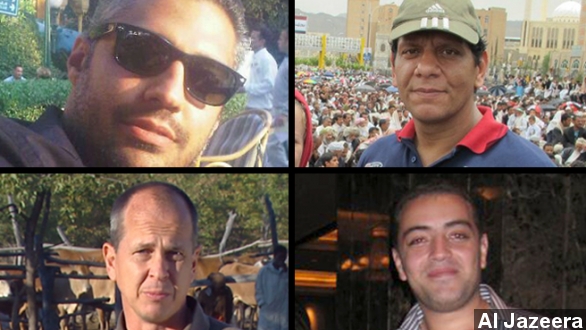 ​The Al Jazeera network is demanding the immediate release of four of its journalists detained in Egypt.

​The Al Jazeera network is demanding the immediate release of four of its journalists — arrested by Egyptian security forces in what Al Jazeera is calling part of a crackdown against the Muslim Brotherhood. Among the detained — correspondent Peter Greste, two producers and a cameraman.

Egypt’s Interior Ministry says the journalists were “spreading false news” and holding meetings with the Muslim Brotherhood. (Via KGUN)

Reports, perhaps, like this drew the interim government’s attention: Focusing on student protests in support of ousted President Mohamed Morsi and his Muslim Brotherhood group.

The Muslim Brotherhood is Egypt’s oldest Islamist movement. The country’s interim government recently designated it a terrorist organization, which criminalizes membership in the group. (Via RT)

And run-ins between security forces and Brotherhood supporters is growing increasingly more common. Media outlets deemed pro-Morsi — including Al Jazeera — were raided by security forces in July. (Via euronews)

According to the Committee to Protect Journalists, six journalists were killed for their work in Egypt in 2013.

The organization lists Egypt, along with Syria and Iraq, as the deadliest countries for journalists in to work in. (Via CCTV)