Why Digital Worship Is Here to Stay 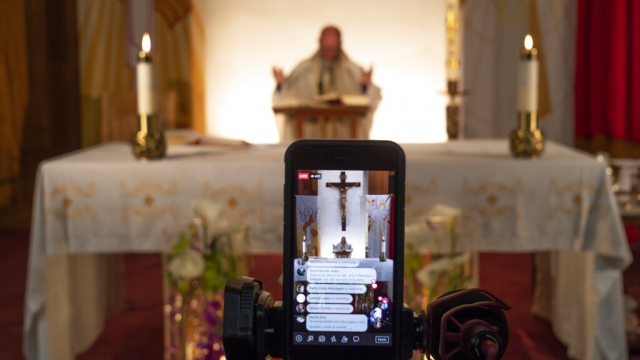 To maintain a sense of community and keep people engaged, places are worship are making changes that could outlast the pandemic.

During the pandemic watching a religious service online…

...became as easy as streaming your favorite show.

As COVID-19 shutdowns increased, many places of worship made the switch. And now the new normal could be here to stay…in some form.

"Never in my wildest dreams, did I imagine I would be a digital rabbi," said Rabbi Paul Cohen of Temple Jeremiah.

For some, the transition was seamless…

"When you have sometimes an older congregation that may not give online or whatever it be, the funds coming in the church just weren't flowing like before," said Giboney, whose group raised $1.3 million for churches in low-income communities.

A new Gallup poll shows U.S. church, mosque, and synagogue membership declined in 2020 to less than 50% for the first time in the polling group's 80-year history.  While that may have more to do with a larger downward trend, some religious institutions did struggle with pandemic attendance.

But that wasn’t the case with every place of worship.

"We've been able to reach people who, you know, children of members who have now gone off to college and wanted to participate in services and now could do so very, very easily," said Cohen.

To maintain a sense of community and keep people engaged, Cohen says the Illinois synagogue revamped the experience.

"In Judaism, we call it visual tefillah, the Hebrew word for prayer. So visual prayer— having images that complement the prayer that's being shared at a given moment," said Cohen.

The Potter’s House, a church in Dallas, also made changes, including the addition of the virtual congregation via an interactive screen.

“We already had an online presence, a pretty robust online presence. But we had to actually take it up a notch, if not five notches, in reference to literally going virtual," said Potter’s House COO Frank Dyer.

The church has been hosting conferences for years on practical ways to make the digital switch, and says now is the time to consider gradual upgrades, even if it starts with a smartphone and a tripod.

"We have no idea what's going to go on with, with the vaccine, how long it’s going to last, if we need to have another booster. Just makes all the sense in the world to invest in some type of infrastructure," stated Dyer.

Because, like school and work, a hybrid future may be inevitable.

"People do really like having hybrid options available to them. Now, the preference for physical still remains," said Kimberlin.

"I think is mandatory. So the Bible declares that we're supposed to take the gospel to all nations. This is now our opportunity," said Cason.

"I was very against using cameras and broadcasting. It seemed just kind of antithetical to what worship is supposed to be. For some people, they enjoy participating in worship sitting in their pajamas on their couch with a glass of wine. You know, they're participating, and they're having a meaningful experience, and it's working for them. Why should I say, 'You can't do that?'" asked Cohen.