Why do chefs wear those tall hats? 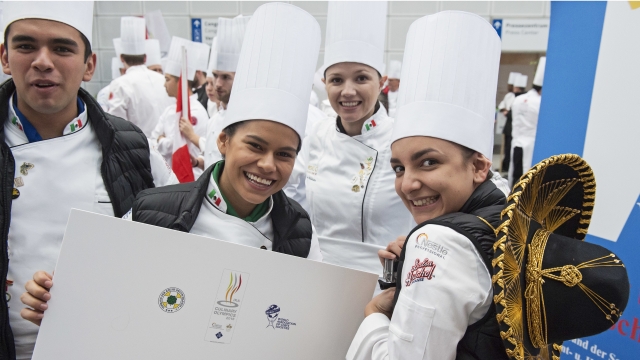 The Frenchman known as "The King of Chefs, and the Chef of Kings" is credited with creating the standard chef’s hat.

A perfectly set table, a dimly lit candle and a chef in the kitchen with a tall hat — all signs that you’re about to have a good meal. But why do chefs wear hats? Mary Fabrikant, chef instructor at Cook Street School of Culinary Arts, says part of it is for sanitary reasons.

"One is to absorb forehead sweat because you're working in a really hot environment sometimes, and also to keep your hair in check so that hair doesn't get in the food," Fabrikant said.

But their use goes beyond keeping your food clean.

The Frenchman known as "The King of Chefs, and the Chef of Kings" is credited with creating the standard chef’s hat. Later, French chef Auguste Escoffier popularized it. The former army soldier wanted his kitchen to run like a military brigade.

"When he got out of the military and came back to kitchen work, he realized that he could make the kitchen function much more smoothly if he instituted this sort of order," Fabrikant said.

He saw the chef as a general and their hat needed to signify that.

"The person who wears the tallest hat in the room is the chef. So, the height of the hat denotes rank, essentially," Fabrikant said.

Some head chefs today are more lax on the type of headwear their staff wears — if they wear any at all. But toque or no toque, to succeed in the kitchen you have to be able to wear many hats.