Why Do We Drink Eggnog? 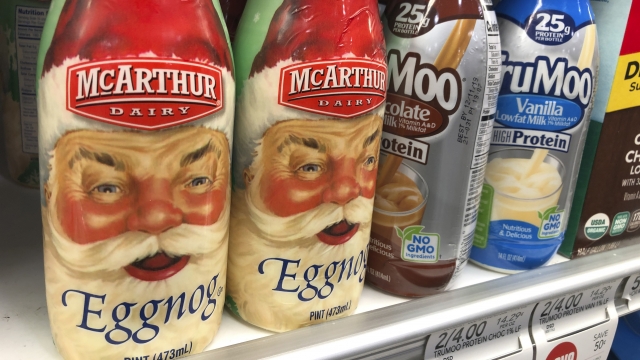 Because of its seasonal spices, eggnog became associated with the holidays and is now mostly consumed in November and December.

If caroling is the sound of Christmas, and fresh-cut evergreens are its smell, then spiked egg yolk mixed with milk can make a pretty good case for the taste of the holiday.

Love it or hate it, eggnog is most popular during this time of the year. According to a YouGov survey, 25% of Americans say it's their favorite holiday drink. Eggnog is typically some mix of milk, cream, sugar, spices and yes — egg yolks — that you can also add some spirits to.

We don’t know its exact origins, but culinary historians say it probably goes back to a medieval British drink called "posset," which was a mixture of curdled hot milk with an ale or wine.

Eventually, it’s believed monks added eggs and figs to the concoction. The drink was most common with the upper class, because ingredients like milk and eggs were pricey — and because of that it was used to toast to success and health. The drink eventually made its way to the U.S.

Why Do We Hang Stockings Around Christmas?

Stockings are a Christmas decoration staple. But why do we hang these garments this time of year?

Because of its seasonal spices, eggnog became associated with the holiday season, and today, folks mostly consume it in November and December. Over the years, people have tried different variations of eggnog.

Records show George Washington liked a particularly strong version with brandy, whiskey, rum and sherry all mixed in. But today, many prefer to drink theirs in the holiday spirit — without the spirits. And while the egg yolk might turn some off, it isn't much cause for concern.The FDA says an official eggnog needs to contain just 1% of egg yolk solids. That leaves a lot of room for creativity. Happy holiday drinking!

An Inside Look At How Scandinavian Christmas Glögg Is Made

It's a staple in Swedish households and a neighborhood favorite at one of the oldest bars in Chicago.