Why Do We Pursue Four-Year Degrees? 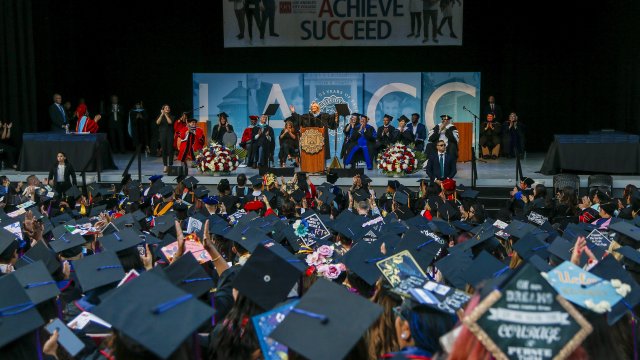 More people are either choosing to leave college, or to not pursue a degree at all.

The rules of the college game have changed.

The number of high schoolers considering a four-year education plummeted from 71 percent to 48 percent since the start of the pandemic. Many people with 4-year degrees say it paid off because of the career they chose.

"40 percent of people will get BAs, will make more than people who get graduate degrees, because they're in the right field of study," said Anthony Carnevale, Director of Georgetown's Center on Education and Workforce.

Some companies are rethinking their need for four-year degrees, but economists don’t want prospective students to take away the message that college isn’t a good option.

The numbers from Georgetown show that lifetime earnings do increase with the right degree, and will put you ahead in the job search.

That’s why economist Beth Akers recommends you consider not only the type of higher education, but what you decide to study — and how that will affect your financial future.

"Are you going to be okay if you go down this path so that you can still live the life that you want and that's a question that we don't often answer," Akers said. "College does deliver a lot of good returns for a lot of people who go."

The average salary for recent grads is just over $55,000, according to the National Association of Colleges and Employers, a nonprofit organization.

More employers seem to be taking note, and are reconsidering what role education plays in hiring.

Researcher Manjari Raman tells Newsy that employers are shifting away from a phenomenon called "degree inflation."

Manjari says as jobs got more sophisticated, fewer workers had the ability to work with new technology.

Now, career experts believe we’re in a period of deflation.

The pandemic played a key role in forcing employers to rethink the role education plays in hiring.

As business started to open back up, there was a high demand for low-paying work.

But people returning to work didn’t want to go back to those same jobs.

They wanted more from their employers: From higher pay to better health care and education opportunities, or just more time with their families.

That made the hiring field much more competitive, with companies trying new methods to stay attractive to prospective hires.

For many, that included dropping four-year degree requirements.

Still, according to an analysis by Fund for our Economic Future, just over 93 percent of employers facing shortages said the pool of qualified applicants didn’t meet their needs.

But workplace strategists argue that certain companies could hire more people if they dropped degree requirements and offered training instead — otherwise known as "upskilling."

This strategy could also help more minority workers who are more likely to struggle to find work.

The value of a four-year degree may also be diminishing in the eyes of employers.

But there’s no telling whether this reconsideration of four year degrees is permanent.

And if the economic tides turn in the future, that diploma could make all the difference.