Why do we put so much worth in diamonds? 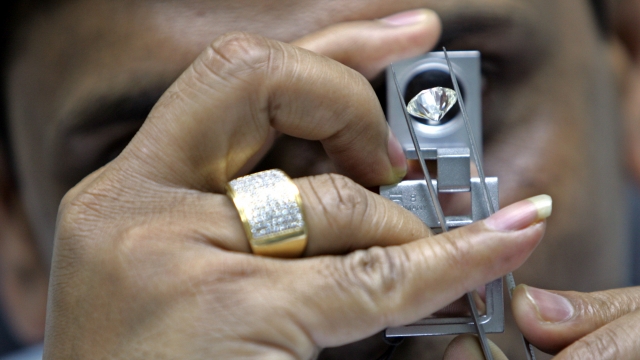 Diamonds became associated with love and engagements around the 15th century. Here's why it wasn't just a romantic gesture.

You've likely seen the commercials, from "Every kiss begins with Kay" to Beyoncé serenading her husband Jay-Z wearing diamonds.

Diamonds have long been regarded as a love-bearing rock, creating the idea that love and diamonds go hand in hand.

"An engagement ring was a very popular item back in the day because it was a way to transfer wealth, right? So, you kept your wealth in gold, among other, and by giving a valuable ring to your beloved, it was a way of saying, 'Look, you know, if anything happens to me, you still have something in your hand or if anything happens between us," he said.

Why do we wear wedding rings?

Where did the tradition of wearing wedding rings come from?

When it comes to diamonds, the popular opinion is often the bigger the better.

That might be because the stone's name comes from the Greek word adamas, or "unconquerable."

But another Greek word associated with diamonds is akrivos, or "expensive."

The average price for a 1-carat diamond can cost you anywhere from $1,500 to $7,500. But the price for each diamond varies on the four C's: cut, clarity, color and carat weight.

And some pay even more than that. An exceptionally unique 15-carat rare blue diamond was auctioned for $57 million last year.

So why are diamonds deemed so valuable?

"They are valuable first and foremost, because they look great and anything that's pretty is immediately coveted," Golan said.

Part of the allure, he says, is how rare diamonds once were.

Out of this world: 555.55-carat black diamond lands In Dubai

Black diamonds, also known as carbonado, are extremely rare and are found naturally on Earth only in Brazil and Central Africa.

Typically, before a diamond ends up on your finger, it goes through a lot of steps.

It forms deep in the earth, under extreme heat and pressure. Diamonds are brought to the surface during natural events, such as volcanic eruptions, and then mined.

"Once we started mining a resource, or creating a diamond, what we see is that there are costs involved," Golan said. "So that creates the basis for pricing, and then it's just a matter of consumer demand and market demands."

That market demand was inspired by successful marketing campaigns.

De Beers' 1947 "a diamond is forever" slogan implied a diamond engagement ring should cost one month's salary — and its value limitless.

"In essence, they tapped very accurately in the fact that there is going to be a growing middle class in the United States. What we saw there was that their ability to offer a diamond to the average American household made them accessible to everybody," Golan continued.

He says despite being around for decades, it wasn't until recently that a lab diamond's quality, clarity and color has improved enough to compete with natural diamonds.

And the lower price for lab-grown diamonds is pulling customers in.

"Because lab grown are so much less costly, it brings the entry points a little bit lower so you can buy a diamond ring or diamond jewelry item spending less," Golan said. "So, those who couldn't afford or those that are younger, you know, teens can actually buy now."

Though familiarity with lab diamonds is still growing.

Jeweler Jean Dousset found a third of its survey participants were somewhat familiar with lab-grown diamonds. Nearly a quarter weren't familiar with them.

Researchers like Golan believe the value of natural diamonds isn't going to decline any time soon.

"Looking at very long term, you know, the world will stop mining natural diamonds and whatever is remaining, remains," he said. "It's like a Picasso, you know, there won't be any more new Picasso. So whatever is out there is becoming more and more precious."

While the trends and dollar signs change, the old saying still rings true: A diamond is forever.

The new collection – called Pandora Brilliance – will be rolled out in the U.K. first and then worldwide next year.