Why Does OPEC Control Oil Prices? 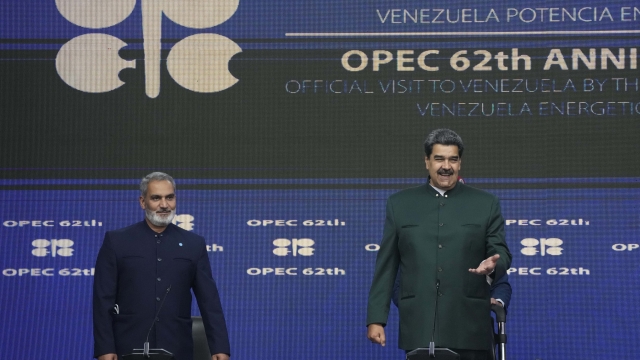 OPEC comprises 13 countries including some of the world’s largest oil exporters.

If you ask around, high gas prices hit close to home.

But a multi-national group, thousands of miles away, is really the one to turn to if you want to gripe about the price of fuel — OPEC.

OPEC is short for the Organization of Petroleum Exporting Countries. Five nations joined together in 1960 to form the oil alliance: Iran, Iraq, Kuwait, Saudi Arabia and Venezuela — each an oil-producing heavyweight. At the time, the U.S. was both the world’s largest consumer and producer of oil. Now, OPEC comprises 13 countries including some of the world’s largest oil-exporters. Many are in the Middle East. Together, they virtually control the whole world’s oil market.

Why? Well, consider this — according to U.S. government data, OPEC exports roughly 60% of the total petroleum traded internationally. Petroleum is used to produce transportation fuels and fuel oils for heating, electricity and asphalt. It’s also found in crude oil — that’s what helps make up the gasoline you pump into your car. All told, OPEC nations are responsible for producing about 40% of the world’s crude oil.  And America uses lots of it. The average American drives over 13,000 miles a year. Collectively, that's over 3.2 trillion miles annually, or according to the Energy Information Administration, roughly 134 billion gallons of gas burned every 365 days. OPEC doesn’t set the price of oil. But any economics professor will tell you, supply and demand determines price. OPEC is the supply side of that equation. Along with 11 other countries in "OPEC plus." That includes Mexico, Malaysia and Russia. Leaders agree to set caps on oil production, to meet expected demand. The goal is to keep the market steady while optimizing profits. The coalition is currently trying to do so, at a time full of uncertainty.

Some stakeholders say the U.S. government needs to increase production and expand leasing to oil drilling to avoid a diesel shortage.

The COVID pandemic upended the oil market as demand plummeted. As a result, the cartel slashed output by a record 10 million barrels per day in 2020. Oil prices plunged into negative territory for the first time ever. They’ve since shot back up, with the average price per crude barrel topping $110 in early 2022. Critics argue OPEC hasn’t ratcheted up production fast enough to meet rapidly-rebounding demand. But the 10-year price high came after Russia launched its military offensive on Ukraine, and cut off much of the West from major oil supplies in Russia. Looming economic uncertainty spurred OPEC’s latest move in October to slash quotas by 2 million barrels per day.

"The reality — globally — as we know, is that there is a huge shortfall in investments to meet this expected future demand growth," said OPEC Secretary General Haitham Al Ghais.

Saudi Arabia is the world’s top producer — responsible for one-third of OPEC’s supply in 2021. And it led the decision to slash production, a move President Joe Biden called "a disappointment."

The president traveled to Saudi Arabia in July, though he said he didn’t go specifically to talk about oil. OPEC’s October announcement caused already steep gas prices in the U.S. to rise. And leaders, including the president, say they’ll act.

"One of the consequences should be a temporary halt in arm sales. The only apparent purpose of this cut in oil supplies is to help the Russians and harm Americans," said Sen. Richard Blumenthal.

"We're going to react to Saudi Arabia. And they're doing a consultation when they come back. And we will take action," said President Biden.

The U.S. and its allies believe the cut is OPEC’s show of support for Russia in the war. Western nations say it helps Russia skirt around sanctions and a looming price cap on oil exports. Russia’s oil revenues are dipping, but it is still a major seller to India and China. Neither have placed sanctions on Moscow. It’s a complicated picture of a touchy economic balancing act — one poised to grow the rift between U.S. and Saudi leaders — and keep drivers on their toes at home. But as long as the oil producers have the keys —  all roads seem to go through OPEC.