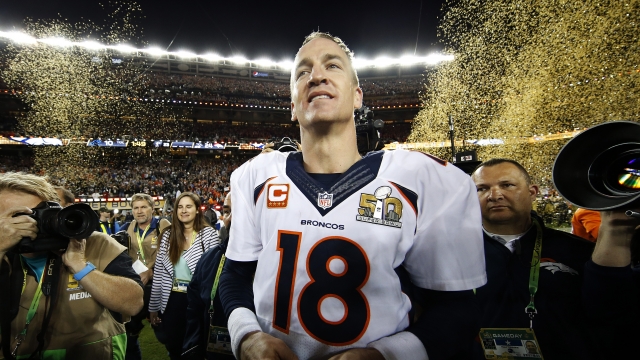 Peyton Manning can't stop talking about Budweiser, but he wasn't paid for his endorsement. So why all the love for Bud? Turns out he's invested in it.

Budweiser had a memorable commercial featuring Helen Mirren during the Super Bowl, but the company got a much more profitable endorsement after the game ended. (Video via Anheuser-Busch InBev)

As you likely watched or at least saw on Twitter, winning quarterback Peyton Manning used his postgame interview to tell reporter Tracy Wolfson: "I'm going to drink a lot of Budweiser tonight, Tracy. I promise you that."

He name dropped the Anheuser-Busch product again at the trophy ceremony which, according to one marketing group, generated $13.9 million worth of buzz for the brand.

An Anheuser-Busch executive quickly denied that Manning was paid for the endorsement but said the company was "surprised and delighted that he did."

NFL players aren't allowed to endorse any alcohol brands, so was Manning just genuinely expressing his fondness for the "king of beers"? Not exactly. (Video via Anheuser-Busch InBev)

While Manning may not receive a check for his postgame comments, he still stands to benefit quite a bit from the buzz. The star QB reportedly holds a stake in two different Anheuser-Busch distributors in his home state of Louisiana.

You’ve probably seen him on those Papa John’s commercials as well. What you may not know is that he owns 21 Papa John’s franchises in the Denver area. (Video via Papa John's International)

No matter what you think about Manning’s proclivity for product placement, you can’t deny it’s effective. But with retirement rumors swirling, Manning’s backing brands should enjoy it while it lasts.