The National Debt Is $20 Trillion, And That's A Huge Problem 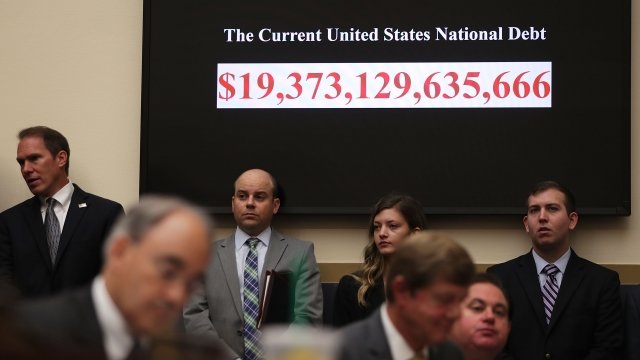 The national debt level has climbed into the trillions over the last few decades.

Growing up, when your birthday rolled around and grandpa handed you a card stuffed with this year's crisp, cool Treasury Bond, you were probably bummed — but doing an important civic duty.

Those little slips of paper literally keep the government running. Turns out that when the government "borrows" money, adding to that ever-climbing debt clock, it actually begins by issuing debt.

These are the basics. Let's say the feds collect $100 of tax money, but they spend $150. This difference is called "the deficit."

To close the gap, the Treasury Department allows investors to chip in and fund the government. They do this through selling Treasury bills, notes and bonds.

Now, CHIP Bill Might Not Raise The Deficit Nearly As Much As Predicted

A Congressional Budget Office report from October had estimated the Children's Health Insurance Program could raise the deficit by over $8 billion.

Treasury bills are paid back with pretty low interest within a year. Notes mature, meaning they're ready for repayment anywhere between two and 10 years. And your grandpa's favorite, bonds, have the highest yield, taking 30 years to ripen. The money collected through this route is the national debt.

Then, it was like Mario hitting a speed strip when Reagan took office, and then everyone who succeeded him. We hit a trillion dollars in 1982, $5 trillion in 1996.

If you broke that down by citizen, the National Debt Clock says we'd each owe $63,222. And don't forget, taxpayers owe interest on all those loans, meaning $5,848 spent on interest per second.

As for who owns the debt, it's pretty diverse. The Treasury says that federal agencies with leftover money, individuals, businesses and foreign countries can all buy bills, notes and bonds as they please.

The Balance has the breakdown: Government agencies hold 30 percent of the national debt. The public owns the other 70 percent. Foreign governments and investors hold nearly half of the 70 percent owned by the public.

Based on the Treasury's official numbers, China is the biggest lender, holding almost 20 percent of the foreign debt, followed by Japan and then a host of other nations.