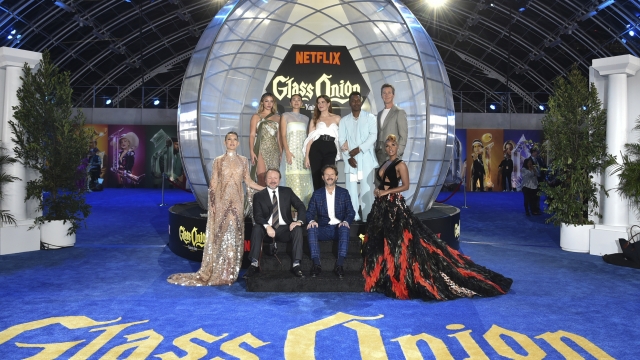 With one more month left in 2022, the top 200 films of the year's domestic box office have grossed more than $6.6 billion — which means they have already surpassed last year's total by more than $2 billion.

That's good news for the recovering industry, whose top three earners this year include the franchise hits "Jurassic World: Dominion," "Doctor Strange in the Multiverse of Madness" and "Top Gun: Maverick."

Grossing more than $716 million domestically, the "Top Gun" sequel originally debuted Memorial Day weekend, and it's coming back to theaters for a two-week victory lap in December.

With that success, one would assume other studios would follow suit into the local movieplex, but the race for streaming dominance isn't slowing down just yet.

With so many new movies and shows coming out around the holidays, there are also just as many spoilers on social media that can ruin a first viewing.

The "Knives Out" sequel "Glass Onion" made an estimated $13 million in its one-week limited theatrical run. The murder mystery from Netflix is headed to streaming before Christmas, but experts say the film could've made $200 million in ticket sales around the world if it had a longer and wider theatrical release.

"Knives Out" made $312 million globally in 2019, and Netflix reportedly spent $400 million on the rights for the next two sequels.

So, why spend so much for a limited theatrical run?

Netflix's chief priority is streaming, and part of that means having exclusive titles that audiences can't watch anywhere else.

Other streamers are doing the same with projects like Disney's "Disenchanted" and "Hocus Pocus 2," Apple's "Causeway," and HBO Max's "A Christmas Story Christmas."

As the platforms continue to compete for subscribers, all of those movies debuted directly to streaming.

Despite the focus on streaming, movie theater goers still have a fairly packed holiday movie lineup with titles like the action comedy "Violent Night," sci-fi sequel "Avatar: The Way of the Water," the Whitney Houston biopic "I Wanna Dance With Somebody," and the film festival darling "The Whale."