Why Everyone Agrees These 4 College Football Teams Are Playoff-Worthy 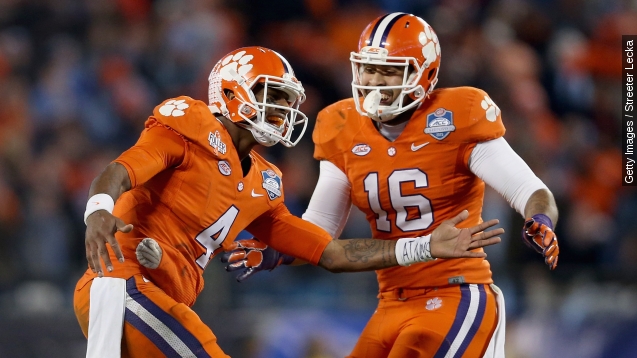 No one is arguing that Clemson, Alabama, Michigan State or Oklahoma shouldn't be in the playoff. How did that happen?

Think of the college football postseason, and you think of controversy.

"Until they lose, I think they should be No. 1," one CBS Sports analyst said.

"I really think you're being a little shortsighted on Ohio State," ESPN contributor Paul Finebaum said.

"It's crazy to me, this committee and the bias they're getting away with," Fox Sports analyst Joel Klatt said.

But what if we told you that this year everyone pretty much agrees on who should be playing for the national championship? It sounds impossible, but it's true.

Right now, Clemson, fresh off a win in the ACC title game, is the undefeated top dog with SEC champion Alabama, Big 12 champion Oklahoma and Big 10 champion Michigan State set to snag the other three spots.

And that's it. No heated arguments over who deserves a chance and who's grossly overrated. Everyone's basically on the same page. How did this happen?

Well, for starters, it helps that one Power 5 conference, the Pac-12, saw its chances at a playoff spot take a huge hit three weeks ago when Stanford lost its second game of the year.

And the other four Power 5 leagues each trotted out a definitive champion without a title game upset or a confusing tie, like the Big 12 had last year. (Video via YouTube / OU Insider)

There also wasn't the pesky issue of a smaller school challenging for the title. The highest ranked small-conference team, Houston, got beat 20-17 by UConn a couple weeks back, and sat at 19th in the playoff rankings entering Saturday. (Video via Houston Athletics)

It's hard to pinpoint the last time this happened. Remember, the College Football Playoff is only in its second year, and before that, we had the BCS, which only chose the top two teams and was, shall we say, flawed.

To be fair, there's still some debate heading into Sunday's rankings about how the top four teams should be seeded, including if Clemson should be No. 1. (Video via CBS Sports)

But at least the four schools playing for a title look to be locked in. We don't blame you if you're still pinching yourself.