Why Some Ex-Intel Chiefs Still Have Security Clearances 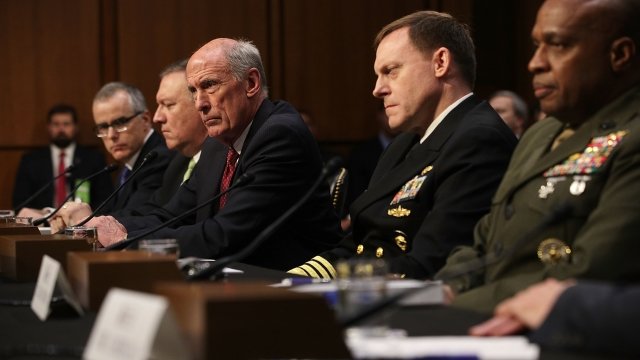 President Trump wants to revoke security clearances for some former intel officials. What are those clearances and why do some people keep them?

President Donald Trump is considering revoking the security clearances of several former intelligence officials who have been critical of his administration.

Each of those former intel chiefs has admonished Trump publicly, particularly after his meeting with Russian President Vladimir Putin in Helsinki.

Nearly 4.1 million people have security clearances, according to the Office of the Director of National Intelligence. Most will lose their access to top-secret information once they leave government service.

But experts say many former high-ranking intelligence officials do maintain some level of security clearance after leaving the government, partly so they can advise their successors on classified matters.

"It's true that if there's a specific issue, you might have former secretaries of defense collaborating with current secretaries of defense or former national security advisers advising a current one, even if you also know there's political feuding going on between those people and President Trump," said Michael O'Hanlon, a senior fellow in Foreign Policy at the Brookings Institution. O'Hanlon previous served on a government advisory board and had a security clearance at that time.

Some former high-ranking government employees can even ask for and receive security briefings on classified matters that can be especially helpful when dealing with ongoing national security issues of a previous presidency.

"So if we're trying to negotiate something about North Korea or Iran or some very sensitive national security issue and the negotiation had begun under the previous presidency, you would want to be able to pick up the phone and call that person and find out what they know and what happened back in that previous period, how that may be shaping the conditions we now face," O'Hanlon said.

The idea of revoking the security clearances was first raised by Republican Sen. Rand Paul, who met with Trump this week. Paul argues ex-intel officials should not be able monetize their security clearances by using them as leverage to get paid speaking gigs and media contracts.

Experts and lawmakers agree that the president does have the power to revoke security clearances at his discretion. But it's unclear if the threat has real teeth, especially considering some members of the list have indicated through spokespeople that they no longer have security clearances.