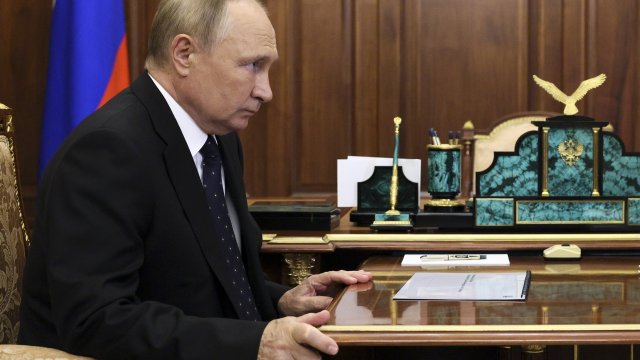 A source with knowledge of U.S. intelligence tells Newsy that Russian President Vladimir Putin is more engaged now in the war than ever before.

Just how desperate is Vladimir Putin?

Two sources familiar with U.S. intelligence say that senior officers in Russia’s intelligence community are getting fed up with their president.

There are indications that Putin’s critics there want to replace the former KGB officer with a current intelligence official, and a person may have been chosen, according to one source. It comes as major losses in Ukraine drove Putin to announce a partial draft — even as he still refuses to call his invasion a war:

"In order to protect our homeland, its sovereignty and its territorial integrity, in order to provide for safety of people of liberated territories, I think it is necessary to support the decision to partially mobilize citizens of Russian federation," Putin said. "I would like to underline this is a partial mobilization."

Fleeing Russians are heading for land borders and airports. Protesters have been arrested and are receiving draft notices during detention, according to the U.S. Ambassador to the Organization for Security and Cooperation in Europe.

And video appears to show civilians arguing with recruiting officers, or leaving with teary goodbyes.

Many Western military analysts see the conscription as a new sign of Russian weakness and predict that the new troops won’t be well-prepared for battle.

A source with knowledge of U.S. intelligence tells Newsy that Putin is more engaged now in the war than ever before, believing he is the only one who can turn around Russia’s losses. He has advisers inside and outside of the Kremlin, some of whom are telling him to get tougher in Ukraine.

The U.S. and its allies continue to call for Russia to end the war.

Why Does Vladimir Putin See Ukraine As Part Of Russia?

Why does Vladimir Putin see Ukraine as a part of Russia?

The U.S. intelligence community believes that Putin is doubling down, in large part because he sees himself as “the personification of Russia,” according to the source.

"This week, President Putin said that Russia would not hesitate to use 'all weapons systems available' in response to a threat to its territorial integrity, a threat that is all the more menacing given Russia's intention to annex large swaths of Ukraine in the days ahead," said Antony Blinken, U.S. Secretary of State. "When that is complete, we can expect President Putin will claim any Ukrainian effort to liberate this land as an attack on so-called Russian territory."

The CIA’s deputy director said last week that the U.S. should not “underestimate Putin’s appetite for risk.”