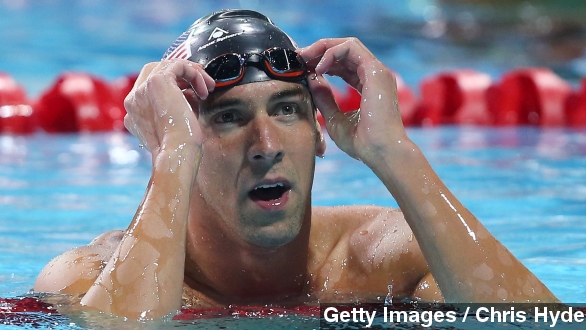 The Olympian's girlfriend told Radar Online she was born with male and female reproductive organs, but reports quickly labeled her a man at birth.

One of the world's most famous athletes Michael Phelps has quite the history of making headlines away from the pool, but his latest venture into the spotlight involves his girlfriend and a seemingly unnecessary debate over whether she was born a man or woman.

Taylor Lianne Chandler told Radar Online she was born with both sets of reproductive organs, but she identified as a boy until her teenage years. While that's considered being born intersex, you'll note the outlet's headline reads she "Was Born A Man!"

Phelps is currently in rehab and serving a six-month suspension from USA Swimming after police in Maryland arrested him for his second DUI in late September. By far the most decorated Olympic athlete in history, Phelps was in the process of training for the 2016 Olympics at the time of his arrest. (Video via CNN & ABC / ESPN)

Chandler also told Radar Online she met Phelps in August through the matchmaking app Tinder, and she told him about her past through an email while he was in rehab. She says the Olympian has yet to respond.

She said, “Michael is a brand, and dating someone like me may not be the best thing. I just hope he follows his heart and not what his people tell him.”

And oh, the headlines that followed. Virtually every headline about the revelation to this point says Chandler was born a man, a boy or a male. The Daily Mail's headline reads Chandler "admits she was born a male" as though she's done something wrong.

And Chandler does appear to have some real remorse about not telling Phelps a very intimate secret earlier in their relationship, but the gender identity reporting hasn't gone over well with her.

In a Facebook post Wednesday, Chandler appeared to reference the Radar Online article when she wrote, in part, "Two steps forward and 100 steps backwards. ... In a world of educated people that had all the facts of intersex and what it means and then to sell a magazine say[ing] Michael Phelps is dating a MAN. I have cried now for an hour."

The Intersex Society of North America tries to combat misconceptions about the incredibly complex issue. "Rather than trying to play a semantic game that never ends ... We work to build a world free of shame, secrecy, and unwanted genital surgeries for anyone born with what someone believes to be non-standard sexual anatomy."

Chandler doesn't know if her relationship with Phelps will continue once he leaves rehab.