Why Immigrants Should Stay Away from Legalized Pot 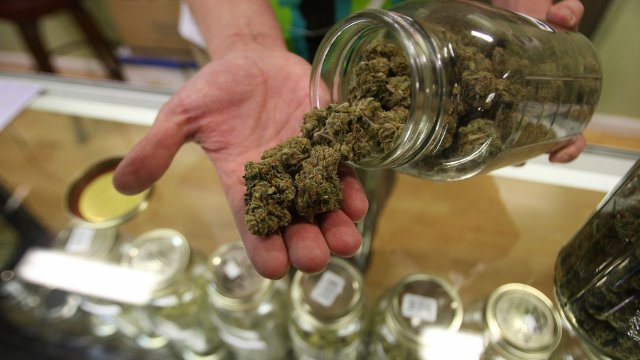 Illinois is the 11th state to legalize weed. But advocates are warning immigrants that using it or working in the industry can cause huge penalties.

"People are going to say, 'It's legal, so yes, it's fine, like, I used or I possessed.' And then they can be detained, they can be deported. They can lose their status."

They worry the new law could become a trap for uninformed non-citizens — whether they are long-time green card-holders or undocumented.

Illinois is the 11th state to legalize recreational pot, but it remains illegal at the federal level. That's why using it — or just being employed in the weed industry — can trigger detention, deportation and visa denials. And lawyers say immigration officers are more likely to probe about cannabis in states that have legalized weed.

And on top of that, immigrants may not be aware that since possession is federally illegal, owning up to it could have the same serious repercussions as any other drug crime. For example, immigrants in removal proceedings who admit to possessing marijuana in the past can be subject to mandatory detention.

"I couldn't believe it was immigration just for a simple possession of marijuana."

That's one of the reasons Jesus Lopez Gutierrez has been detained by ICE for seven months. The undocumented man was arrested in Iowa for possession of marijuana for personal use and was swiftly transferred to ICE custody, even though the initial charges were dropped. An immigration judge denied his request for a bond on the grounds that he had admitted to cannabis possession. His lawyer argues that his mandatory detention is invalid because the immigration judge did not properly inform his client of his rights during the bond hearing.

"They knew what were the charges. They asked me if I consented, and I admitted because I was nervous, I was like, "Should I lie or should I tell the truth?" And I said the truth, and just for that, I was an extreme danger to society."

In a lawsuit against ICE, Gutierrez alleges his detention is illegal because he qualifies for a DACA renewal.

Advocates are also raising the alarm about how the state's initiative to expunge some past cannabis arrests and convictions could backfire for immigrants. That's because the erased convictions will still show up on immigrants' records when they apply for citizenship or other benefits.

"So on the application it asks, 'Have you ever been convicted of you know of a crime?' For all other purposes, they don't have to disclose that. But for immigration, they do. And so that's something that the federal government can say you're committing fraud."

"It can happen through investing in, you know, giving funds to local organizations. But there's also things that they can do to alert folks. So, for example, for owning a dispensary or things like that, people are going to have to apply for licensing through the state, the state can give advisals to say, 'if you're not a citizen, or you have people in your household who are not citizens, you may want to consult with an immigration lawyer.'"

A spokesperson for Illinois Gov. J. B. Pritzker told Newsy that "the administration is meeting with stakeholders to ensure advocates are getting the education they need and can share that information with communities around the state." So for now, it's up to advocates to inform as many immigrants as possible.

"We're just, like, pretending, right? Like you if you're at the airport coming in and the immigration official asks, 'Have you ever used marijuana?', what are you going to say?"

"I can't answer that question."

"You can detain me, but I know I have a right to an attorney."

"That's how you should answer, right?"