Why Is It So Difficult To Tackle Homelessness? 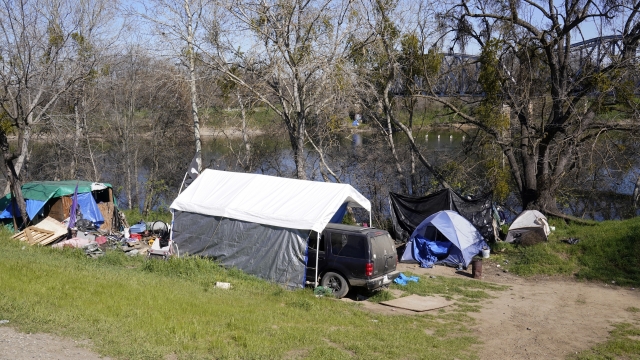 How to resolve homelessness is a long-running topic of conversation, with few easy answers.

The U.S. is struggling to solve its homelessness crisis.

The number of Americans living on the streets and in shelters is growing.

"This is home. Housing is so expensive, and you can't afford. I would be killing myself to pay rent," said Knoye Brown, who lives in a tent.

Those rent prices are only increasing.

And that means even more Americans will have a difficult time affording housing.

When you add in record high inflation, that leaves America's homeless even more vulnerable.

In 2020 nearly 600,000 Americans were left without a home, according to the National Alliance to End Homelessness.

Data from the non-profit organization shows overall homelessness has improved by 10% since 2007.

And in recent months homelessness has reached crisis levels in major cities across the country.

This year Knoxville saw a 50% increase in its homeless population, Long Beach, California saw a 62% increase since 2020 and

Homelessness can come in many forms and can impact all ages.

Many Americans are frustrated with inflation and having to shell out hundreds of extra dollars for rent as it increases across the country.

In January 2020 70% of the homeless were individuals and 30% belonged to families with children.

"I wasn’t able to finish school because I didn’t know where I would sleep after school. So I would stay where I was at, so I had a spot," said Conner Showen, a former young homeless person.

States and cities have set aside more funding to try to curb the issue.

New York has more than doubled its spending to over $3 billion since 2014.

And in New Mexico, $10 million is going to communities to buy old motels and hotels and transform them into transitional housing.

These are just a string of new methods in an attempt to tackle a problem that goes back decades.

From then on affordable homes were demolished in many minority neighborhoods as part of urban renewal.

In the 1970s investment in public housing started to decline when President Richard Nixon imposed a moratorium on new public housing after he declared them a failure, and instead pivoted to housing subsidies.

And in the 80s welfare programs to support those in need were cut under President Ronald Reagan’s economic plans to lower taxes for businesses.

This was further exacerbated by policies that favor single family housing zones.

According to the New York Times, most land plots are designed for a single-family house. Many state laws and zoning rules limit the land that can be used to build multi-unit buildings, like apartment buildings that can house multiple families.

"Really it’s a blend of a trifecta of affordable housing, mental illness and substance abuse. When you add those three at various levels for each person, this is what we’re facing," said Jeff Hicks, the executive director of Hope Rescue Mission.

Other states like California and Oregon have taken other approaches and passed laws in recent years to end single-family zoning so more affordable housing can be built.

Some cities, like Missoula, Montana have moved toward sanction camps, known as temporary safe outdoor spaces.

"49% of the people that have gone through here are now permanently in housing, recovery, or in areas where we mended some family situations, but they have not turned back to the system," said April Seat, the director of outreach at Hope Rescue Mission.

In the last year a number of state legislatures introduced bills that some say criminalize homelessness.

In Tennessee, it’s now a felony for homeless people to camp in parks or other public property. Some argue this is not the solution.

"I believe it’s only a misdemeanor but with a small misdemeanor and a failure to appear, now you have warrants. You can be jailed at any time, it’s difficult to walk into a state building or federally funded building because you’re worried instead of getting help or resources, you’re scared you’re going to get indebted to a lack of it all," said Seat.

Others, like Judge Glock with the Cicero Institute, believe camping bans are the right path to helping the homeless long-term.

And record-high inflation is adding another hurdle for Americans struggling to keep up with rising rent prices.

For some those rent price increases are simply unaffordable.

"We do see people falling into homelessness because they can’t afford rent. It’s not like it’s being raised $30 to $60 and some areas are raising $200," said Seat.

According to government data reviewed by the LA Times, new rent leases have increased by more than 11% year-over-year.

And polling from Freddie Mac found a majority of renters saw a rent price hike in the last year.

One in five say they’re "extremely likely" to miss a payment.

The severity of America's homeless problem ranges depending on the city and state, but cities across the country are taking action to address the problem.

The U.S. Interagency Council on Homelessness says the solution is to tackle the housing issue, integrate healthcare, strengthen crisis response systems and build career pathways. But this can’t be done without building and fostering partnerships to address the root causes of homelessness.