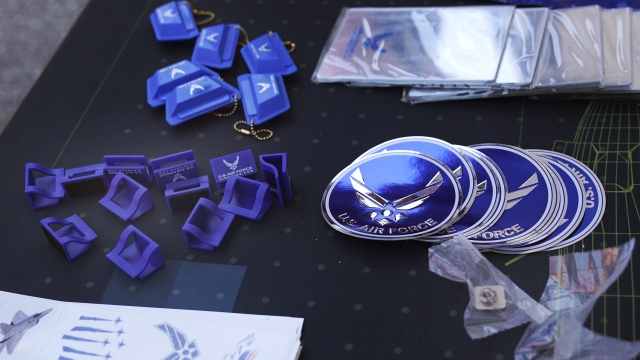 A "war for talent" is how the Army is describing its plummeting recruitment numbers.

The military targets teenagers and young adults, but get this: most of them aren't qualified to serve.

The crisis is hitting a boiling point.

"We are at a critical shortage, the highest shortage we've had since 1999. Unfortunately every branch is experiencing it," said Ewing.

And they're throwing everything at the wall to see what sticks.

But not even the promises of signing bonuses and boundless opportunities to see the world are convincing enough people to join the Air Force.

Across the board, the military is facing new troop deficits in the thousands, with potentially massive consequences.

"It's definitely vital to national security, that we properly address the shortage that we have," said Ewing.

The military must recruit 184,000 people every year if it wants to replace people who leave the service, according to the Labor Department.

The Department of Defense told Newsy that while the Marines and Coast Guard have already met their recruiting goals this year, other branches are still struggling.

As of April, the Army was just over two-thirds of the way to their goal.

Major General Ed Thomas, the commander of the Air Force recruiting service, tells us "the Air Force is about 80% towards its recruiting goal and expects to hit target with a caveat."

The aggressive labor market is also adding challenges with more open jobs than people to fill them.

That means the military is competing for the same talent as businesses in the private sector.

"Our recruiters suffered the most when schools locked down because they couldn't get in schools. And so it was a challenge for them to get to the young people just to give them the information we need them to have," said Ewing.

But there's a worsening problem that could impact the military years down the road.

"Longer term challenges: declining eligibility for the military today. Those numbers have dropped by about almost 6% over the last 2 to 3 years," Thomas said.

The Pentagon reports less than a quarter of 17-24 year olds meet enlistment requirements for a number of reasons, with many unable to join without a waiver.

"Whether that's due to obesity or criminal charges, drugs are becoming way more prevalent than they used to be," said Ewing.

Another factor is that the DOD has restrictions in place for anyone with prior treatment for ADHD.

Officials also warned that the pandemic's remote schooling may have lowered overall aptitude and fitness levels.

Then, there are the cash bonuses.

The military is offering $35,000 in bonuses for certain recruits who can leave for basic training within 30 days of signing up.

"It's absolutely to get more folks in our force. We need to grow from the bottom up. We have a lot of senior folks in the Army right now. But we are looking to bring in our replacements ultimately," said Ewing.

Despite the added perks, the military acknowledges interest among young adults is waning.

In an Internal Defense Department survey of 16 to 21 year olds, only 9% reported they would sign up for the military.

A majority of them feared they would experience emotional or psychological problems after serving.

Major General Thomas believes there is a lack of understanding of what military life is like.

"The American military is one of the best places where people can come in, be accepted as a team, be taken care of as a team, and be able to to thrive physically, spiritually, emotionally, intellectually," said Thomas.

One survey found last year, just 45% of Americans had a "great deal of trust and confidence" in the military.

Major General Thomas recognizes these pitfalls, but he says the military is trying to build confidence by building a better understanding of what value troops bring to the nation.

"Perception is reality for people. And those are the kinds of things that we have to be able to overcome," said Thomas.

The military is even leaning on Hollywood for a boost, with the Navy and Air Force relying on the summer blockbuster "Top Gun: Maverick" to attract recruits.

The Army's recruitment commander told Newsy they're also searching within the video gaming community for people who might translate those skills into technology jobs.

Because without troops to fill those seats, leaders worry there could be ripple effects long into the future.