Why Is Russia The Focus Of G7 Summit Sans Russia? 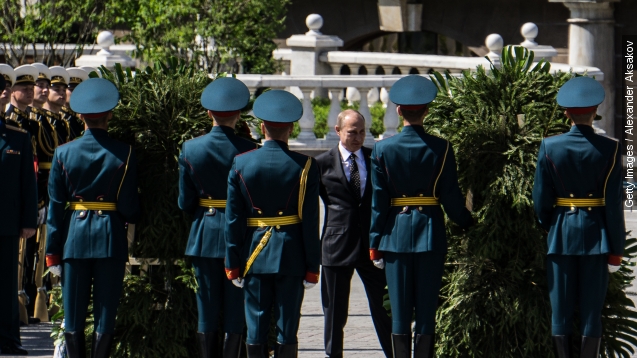 At a summit in Germany, the G7, formerly the G8, is focusing on its suspended member, Russia, and the country's alleged actions in Ukraine.

World leaders are converging on Bavaria for the G8 — or rather G7 — summit.

It used to be the G8 until Russia and Vladimir Putin were suspended over the conflict in Ukraine. (Video via RT)

Still, despite missing the conference, Putin's widely expected to be one of its main focuses, as the remaining G7 try to figure out what to do about the crisis. (Video via BBC)

That's largely because President Obama is pushing the issue of "Russian aggression." (Video via Al Jazeera)

The timing of that might seem odd, given that, compared to the fighting that led up to this past winter's cease-fire, Ukraine's seen relative quiet in recent months. (Video via Channel 4)

But Obama has sided with his counterpart at the European Council, Poland's Donald Tusk, who has lobbied for toughening sanctions against Russia. (Video via The White House)

And there's a reason for that — Russia's been repeatedly scolded on the international stage, and yet there are continuing reports from the Ukrainian government and international monitors of Russian troops in Ukraine's east. (Video via CCTV)

Other leaders have touched on that subject as well, with Japan's Prime Minister Shinzo Abe visiting Ukraine on his way to the summit. (Video via NHK World)

Still, there are other issues on the table, including climate change and continued economic instability in some European countries, like Greece. (Video via Sky News)

And, as with other similar summits, there's skepticism that anything of substance will come of it, including progress in Ukraine. (Video via CNN)

This video includes an image from Getty Images and NATO / Digital Globe.