Why Is Santa Claus Dressed In Red? 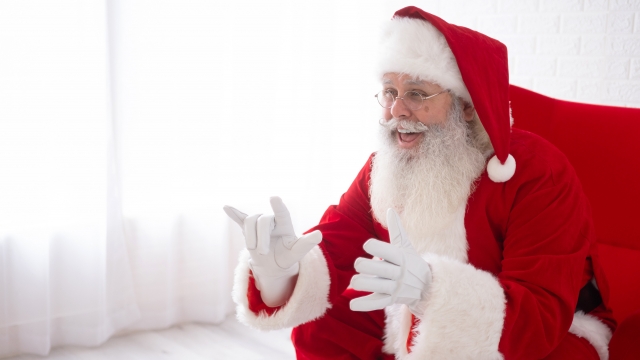 Early depictions show Santa Claus in yellow, green, even stars and stripes. So why do we always see jolly old St. Nicholas dressed in red?

Christmas lights sparkle in every color as they line trees and homes. But the man coming down our chimney sports only one shade.

Santa Claus is dressed in red and hopefully with gifts in tow, but he hasn't always been monochromatic.

Santa is based off Saint Nicholas, the fourth century patron Saint known for giving gifts.

Early depictions were in black and white and showed a character that appeared more pious than the jolly, bearded Santa we know today.

In 1823, he published a poem known today as "'Twas the Night Before Christmas."

It describes a Santa "dressed all in fur," with red, rosy cheeks and a beard as white as snow. This helped shape Santa's physical appearance, but didn't give him his red dress code yet.

Letters To Santa? How About Calling, Texting Or Emailing Him This Year

Here's a holiday freebie parents will appreciate: You can help your kids call, text, email or even FaceTime Santa, and these services are all free.

An 1863 depiction on the cover of Harper's Weekly showed Santa in stars and stripes.

The artist, Thomas Nast, supported the Union during the Civil War.

An 1864 illustration of Moore's poem shows Santa dressed in yellow, and an 1868 ad shows him with a red jacket, but a green hat and no pants.

Finally, in 1881, Santa appears entirely dressed in his famous red suit; this image was another from Nast, but this uniform wasn't the uniform on all Santas yet.

In 1902, Santa graced the cover of "The Life and Adventures of Santa Claus" dressed in green.

But red eventually won out.

Artist Haddon Sundblom created an ad for the company in 1931 and continued to produce similar images for more than three decades.

Today, Santas come in all shapes and sizes, and they come by foot, motorcycle, or sleigh, but one thing is always certain ... Santa Claus dresses in red.